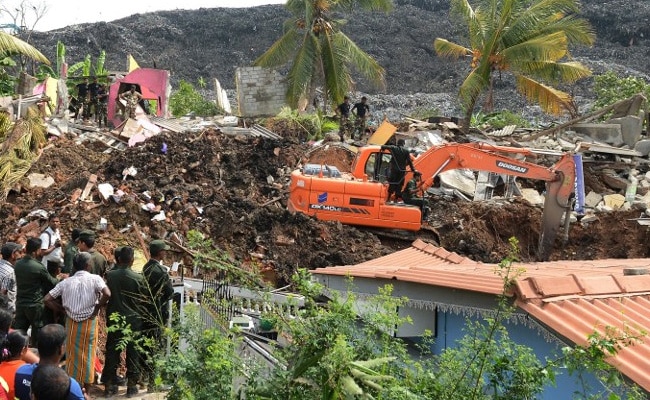 Young boys and girls aged b/w 11 and 15 were among the confirmed killed following incident. (File Photo)

Colombo: Sri Lankan soldiers dug through rubbish with their bare hands Saturday to pull out victims after a huge garbage mountain collapsed on their homes, killing 19 people.

Four children were among the dead following Friday's incident at Kolonnawa on the northeastern edge of the capital, Colombo national hospital spokeswoman Pushpa Soysa said.

The 300-foot (91-metre) high dump came crashing down on neighbouring homes Friday as the country marked the traditional new year.

"We remain on standby, some people who were pulled out of wrecked homes were brought in overnight," she told AFP. "The search operations are on, so we are expecting more victims to be brought in."

Businessman Saman Wimalasiri was one of the first responders and said he helped to rescue several people trapped inside wrecked homes.

"We used ropes and pulled out an elderly woman who was trapped under the debris of her own home," Wimalasiri told AFP. "It took us about four hours to get her to safety."

He said some areas could not be reached because the garbage slide had made them unstable.

The initial rescue was carried out by volunteers such as Wimalasiri before President Maithripala Sirisena ordered hundreds of troops to search for survivors through the night.

Guttila Silva, a former mayor and local politician, said residents were angry that the Colombo Municipality had continued to dump hundreds of tonnes of garbage at the dump daily despite safety concerns.

About 800 tonnes of solid waste is added per day to the open dump.

"People are naturally angry because their protests were ignored," Silva said. " I fear the death toll could go up because more than a dozen are still missing."

Police said a total of 145 homes, mostly shacks, were destroyed when a side of the garbage mountain came crashing down on Friday following heavy rain the previous day and a fire hours earlier.

More than 600 people were given temporary shelter at a government-run school in the area as authorities looked for alternative accommodation for those living near the dump.

Many residents had evacuated their homes before the disaster because of the heavy rain.

"The casualties would have been much higher if most people had not left their homes earlier in the day," a disaster management official told reporters at the site.

Three homes in the area were destroyed in February last year following a minor garbage slide and the authorities had warned another 25 households to evacuate because of risks to them.

Promoted
Listen to the latest songs, only on JioSaavn.com
Sri Lanka's parliament was warned recently that the 23 million tonnes of garbage rotting at Kolonnawa was a serious health hazard.