Ousted Prime Minister Ranil Wickremesinghe claimed in a Facebook post on Monday that he had obtained the signatures of 126 MPs calling for parliament to be reconvened immediately to end the political standoff. 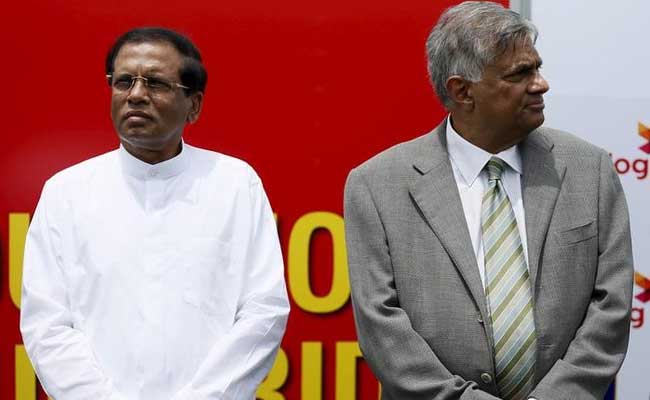 Sri Lanka today braced for a protest called by ousted prime minister Ranil Wickremesinghe's party against what it said was a "coup" by President Maithripala Sirisena, amidst efforts by opposing sides to secure their numbers in parliament to end the country's political crisis.

Sri Lanka, a Buddhist-majority nation, was plunged into chaos on Friday when President Sirisena sacked Prime Minister Wickremesinghe in a surprise move. He also suspended parliament in an apparent bid to shore up support for newly appointed Prime Minister Mahinda Rajapaksa.

President Sirisena is under increasing political and diplomatic pressure to reconvene parliament and resolve the constitutional crisis.

Ousted Prime Minister Wickremesinghe's United National Party (UNP) held a protest today in the capital, Colombo. "We are calling upon all sections of the society who believe in democracy and rule of law to gather and protest," Champika Ranawaka, a former minister said.

Mangala Samaraweera, the ex-finance minister under ousted PM Wickremesinghe said, "This was a constitutional coup and it is our duty to protect democracy and sovereignty of people".

The supporters of Mr Rajapaksa, a former president, are confident that he would be able to prove majority support on the parliament floor as they are sure that members of ousted PM Wickremesinghe's UNP would defect.

"We are waiting for more UNP members to join us. We have the numbers," Lakshman Yapa Abeywardena, a Rajapaksa loyalist, said.

Ranil Wickremesinghe has said that he still commands the majority. However, he suffered a setback after four lawmakers from his party, who had pledged allegiance to him in the public, took a U-turn and accepted ministerial positions in the Rajapaksa government.

"We have the majority despite four of them joining Rajapaksa," Ranjith Madduma Bandara, an ex-minister, said.

Speaker Jayasuriya has called for a meeting of all party leaders to assess the current political situation. At least 128 members had written to him calling for reconvening of parliament.

Mr Jayasuriya has insisted that the issue needs to be settled within parliament.

Both Wickremesinghe and Rajapaksa are working to secure their numbers in parliament.

The TNA sources said R Sampanthan, who is also the leader of the main Opposition, was asked by Mr Rajapaska to stay neutral in case of a floor test.

The TNA has 16 MPs in the 225-member assembly and can play a crucial role in deciding the legitimacy of the government. Mahinda Rajapaksa needs 18 more MPs to give him a simple majority of 113 in the House of 225 members.

Mr Rajapaksa's tenure as president was marred by allegations of authoritarianism, corruption and human rights abuses, especially against the country's Tamil minority.

He was defeated at the 2015 presidential elections when Ranil Wickremesinghe and Maithripala Sirisena formed an unlikely coalition, and their government initiated several investigations into alleged Rajapaksa-era crimes.

Under Sri Lanka's Constitution, the president, who maintains executive powers, can appoint a new prime minister once the current premier has lost control of parliament.

Ranil Wickremesinghe argues he cannot legally be dismissed until he loses the support of parliament. His party was prevented from holding a vote when President Sirisena abruptly suspended parliament on Saturday until 16 November.

Ousted Prime Minister Wickremesinghe claimed in a Facebook post on Monday that he had obtained the signatures of 126 MPs calling for parliament to be reconvened  immediately to end the political standoff.