Sri Lanka Blasts: Latest reports however, pegged the number of dead to be more than 150, including 35 foreigners, with 400 injured.

US President Donald Trump in a tweet today condemned the multiple blasts in Sri Lanka, but he mentioned a very high number of casualties - in millions. Tweeting his condolence, Mr Trump said the blasts "killed at least 138 million people".

Latest reports put the number of dead to be around 158, including 35 foreigners, with 400 injured.

"Heartfelt condolences from the people of the United States to the people of Sri Lanka on the horrible terrorist attacks on churches and hotels that have killed at least 138 million people and badly injured 600 more. We stand ready to help," tweeted Trump.

The tweet with the exaggerated figure has since been deleted. He posted another tweet in its place. 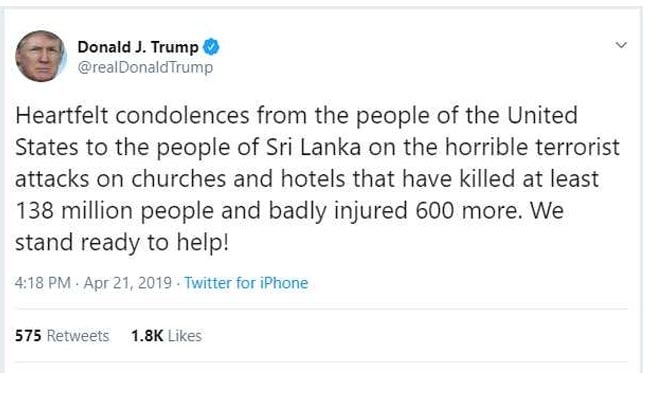 The first blasts hit three high-end hotels and a church in Sri Lankan capital Colombo. Two other churches outside Colombo were targeted as well. The explosions occurred during Easter Mass. Just hours later, another explosion occurred at a hotel opposite the national zoo in Dehiwala area, near Colombo.

138 people have been killed in Sri Lanka, with more that 600 badly injured, in a terrorist attack on churches and hotels. The United States offers heartfelt condolences to the great people of Sri Lanka. We stand ready to help!

Sri Lankan Prime Minister Ranil Wickremesinghe condemned the attack in a tweet and urged citizens to stay strong and united. President Maithripala Sirisena said he was shocked by the explosions and urged for calm.

The government also called an emergency meeting after the blasts.