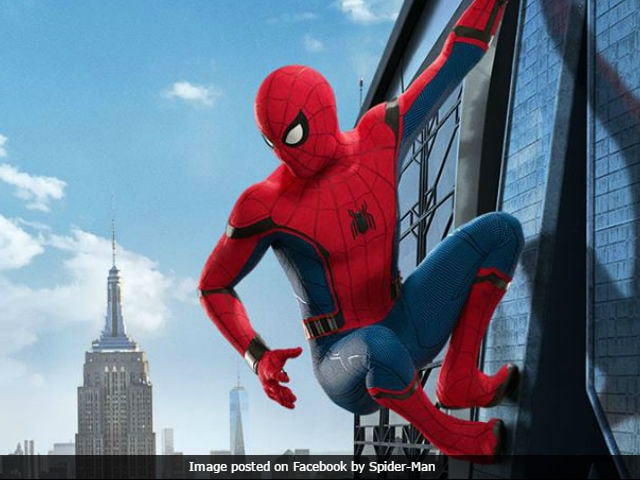 Spider-Man has never been Cool. The very concept of coolness is at odds with Peter Parker, who bashfully buried his nose in books and science experiments and stammered around girls long before he had radioactive blood. Spanning past fifty years, his superhero saga has uniquely remained that of a young man stretched miraculously past breaking point, an unfortunate goof forever struggling to keep up, barely able to hold on to a good thing for more than one issue. Unlike other leotarded legends, we care for him more than we want to be him. Pete is one of us because he is the jumpiest, nerviest, most heartfelt part of us. He is our Uncool.

It fits perfectly, then, that he's almost famous. Spider-Man: Homecoming starts right after Spidey's unforgettable battle sequence in Captain America: Civil War, with our hero benched by Iron Man and told to lay low. Much as he wants to call himself an Avenger, he isn't part of the band. He got to play one gig nobody saw, and now he leaves too many voicemails. Meet Spider-Man, restlessly swinging around Queens, New York, his sloppy movements cut to music made by guys from that same friendly neighbourhood. 'Hey Ho Lets Go' indeed. 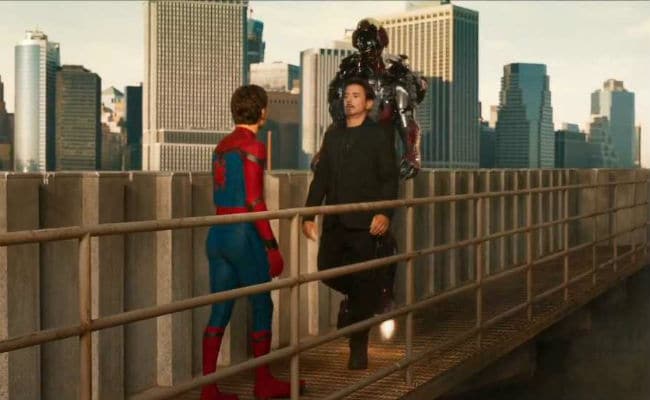 The film embraces Parker's inability to stay in his own skin. This approach lets director Jon Watts craft a frothy high-school take on a superhero who deserves a laugh track. There is a winged menace stealing alien technology but there is also a date to be found for the upcoming school dance. This is a coming-of-age comedy for the superhero subset, one where teething troubles include grappling with web-grenades and avoiding being sucked into propellers of airplanes. All while schoolgirls dreamily discuss which Avenger they'd marry and which they'd kill.

A bright, refreshingly diverse cast - Zendaya, rolling her eyes knowingly from under messy curls, is an ice-cool standout - and some clever storytelling decisions distinguish Spider-Man: Homecoming from the 80s high-school comedies it constantly references. Flash Thompson, for example, the bully who tormented Parker from the start, is no longer a broad-shouldered jock but instead another nerd, just meaner and wealthier. The kind of jerk who rules over the cafeteria these days, because the quarterback has fallen behind favour. (The role is played here, quite amusingly, by The Grand Budapest Hotel actor Tony Revolori. In contrast, Sam Raimi's first Spider-Man film had the beefy Joe Manganiello in the part.)

The Shakespearian Spider-Man 2 is still the greatest superhero film of all time but, like the other Raimi films, it lacked the trademark Spidey insouciance: the puns Peter makes to keep his opponents off balance while overcompensating, from behind the mask, for his own introverted anxiety. It is here the new film shines, with a young and enthused Spider-Man taking a moment to get his 'hero' stance right before interrupting a gang of ATM robbers by asking if they'd forgotten their pin code. 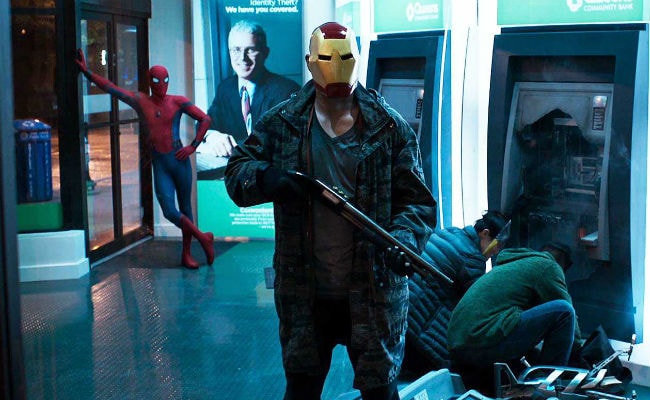 The kid is flat-out fantastic. Tom Holland, 21, is boyish enough to play a 15-year-old Peter, and his portrayal is a tightrope walk between eagerness and hesitation. He plays and voices Spidey with an irresistible elasticity, believably pulled in a million different directions at once, his vulnerability making him special. This film features an echo of an iconic heavy-lifting scene (from Amazing Spider-Man #33) but while Steve Ditko's muscular and evocative drawings made the weight Spider-Man lifts appear colossal in the comic, the film works because of Holland straining, sobbing, whimpering under the weight. The actor humanises the action.

This is crucial given that the action sequences are unimaginative and overlong. Save for one moment involving a helicopter and a window, the fight scenes in the new film are disappointingly dull - especially at a time when comic-book movies are really having fun with these, as evidenced by the film that showed off this Spidey the first time - yet Holland, as a hero too nervous to stop talking, keeps things afloat. Through the demanding action sequences, he barks web-commands through his earpiece to a virtual assistant, sounding for all the world like a gamer talking to himself. Like someone trying to convince himself he's in control.

It's not entirely clear who is in control, to be fair. Quite like the global box office, the world has been overrun by superheroes. Captain America is casually referred to as a war criminal, Bruce Banner's picture is right up there next to the greatest scientists in school, and alien technology from the Avengers battle in New York is creating the villains of today. 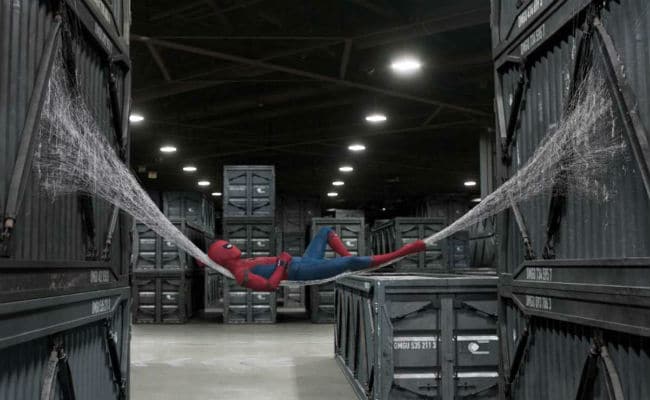 The bad guy here is Adrian Toomes, played by Michael Keaton in a nostalgic fur-collared jacket. As a construction scavenger who has chanced upon technology beyond his dreams, Keaton is superb, offering a look at the wheels spinning behind his shifty, blinking eyes. His menace comes from the cold believability he brings to the role, and his earnest, even well-deserved hatred for Peter's billionaire mentor, Tony Stark. Robert Downey Jr's Stark, aka Iron Man, flits in and out of this film like a bullying uncle, having identified Peter's genius and trying to groom him with tough love, while also - clearly - being out of his depth. 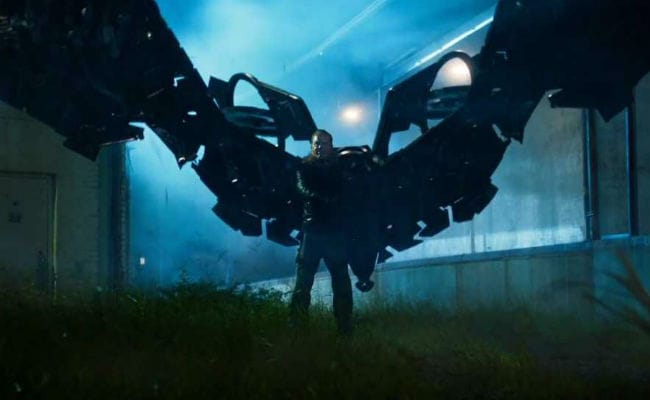 Peter's actual Uncle, the one who parroted Stan Lee's lines about power and responsibility - a quote the internet has at times (wrongly) insisted was spoken by Gandhi, or Martin Luther King - isn't even mentioned in this new film, and this simple decision to skip over the origin story allows Spider-Man: Homecoming to swing right from the get go. Aunt May, on the other hand, is perfectly cast: Marisa Tomei being protective and fussy and so casually breathtaking we need to see a lot more of her. We'll get that next time, his film reassures us, just as we'll see much more of Zendaya's Michelle, a girl who'd kill in a Breakfast Club remake - but that may even be the next Spider-plot. Spider-Man Homecoming enjoys being a tease, throwing in characters and references to thrill and confound many a Spider-fan. (I mean, fellow true believer, Miles Morales' uncle shows up - and you won't believe who plays him.)

My one niggle, the kind of thing that would cause wavy lines to appear around my head in the comics, is that Spider-Man doesn't appear to have his all-purpose instinctive warning system, his Spider-Sense. There are times he plops into danger he should see coming. Then again, perhaps he isn't yet sure what to do with that feeling. As a couple of grown-ups in the film tell him, his body is changing. It's all good, he'll get there, and it's neat to watch him flail. These are the wonder years.