In a move some might be surprised was even necessary given Spain's famously hot climate, Sanchez urged office workers to follow his own tie-free lead. 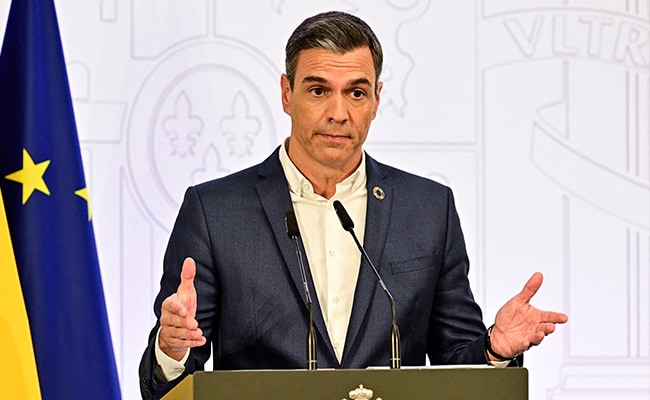 Feeling a little more comfortable would save energy, he said.

Spanish Prime Minister Pedro Sanchez on Friday called on office workers to throw sartorial caution to the wind and ditch their ties amid scorching summer temperatures.

In a move some might be surprised was even necessary given Spain's famously hot climate, Sanchez urged office workers to follow his own tie-free lead.

"I would like you to see that I am not wearing a tie," said Sanchez, smiling broadly, pointing to his open neck shirt during a news conference in Madrid.

Feeling a little more comfortable would save energy if it resulted in less air conditioning being used, he said.

"This means that we can all save energy," he said, adding that he had asked all ministers and public officials to stop wearing ties and hoped the private sector would also follow suit.

The Spanish government is on Monday set to adopt a set of "urgent" energy-saving measures, Sanchez said, "in line with what other European countries do", without elaborating.

Following Moscow's invasion of Ukraine, the European Commission released in mid-May a 210-billion-euro plan aiming to boost renewable energies and reduce energy consumption to put an end to dependency on Russian gas.

In response, Spain has adopted several measures including encouraging remote work and the limiting of air conditioning in offices in summer and radiators in winter.

The 27 EU states also agreed on Tuesday "to reduce their gas demand by 15 percent compared to their average consumption in the past five years, between 1 August 2022 and 31 March 2023, with measures of their own choice," the European Council said in a statement.

Several German cities said this week they would step up efforts to save energy, with Hanover in the north announcing plans to only offer cold showers at public pools and sports centres and Berlin switching off spotlights illuminating its historic monuments.