Playing down talk of possible coalition options, Deputy Prime Minister Carmen Calvo said the Socialists would try to govern alone, while party president Cristina Narbona said it was in no hurry to decide. 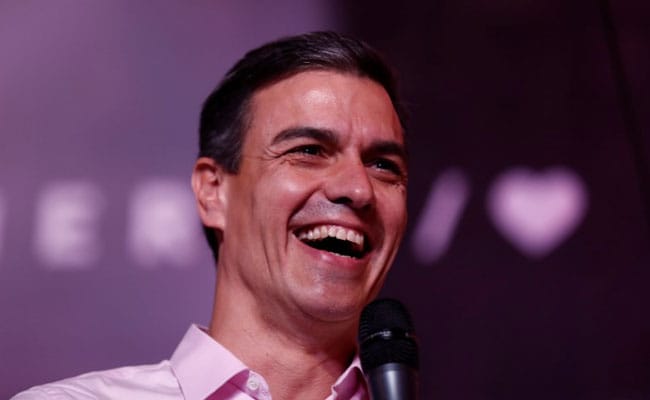 PM Pedro Sanchez's party increased their representation to 123 seats from 84 in the parliament.

Spain's ruling Socialists were weighing options for forming a new government on Monday after they won a national election but fell short of a majority in a deeply fragmented parliament that could spell prolonged political uncertainty.

Playing down talk of possible coalition options, Deputy Prime Minister Carmen Calvo said the Socialists would try to govern alone, while party president Cristina Narbona said it was in no hurry to decide.

"The Socialists will try to govern on their own," Calvo said in an interview on Cadena Ser radio. "We have more than enough (votes) to steer this ship along the course it must follow."

Prime Minister Pedro Sanchez, whose party celebrated into the small hours after increasing their representation in Sunday's election to 123 seats from 84, declined to comment ahead of a strategy meeting on Monday afternoon.

If he does seek a coalition partner, he could opt for a complex alliance with fellow leftists Podemos that would likely require support from at least one Catalan separatist lawmaker, or he could risk upsetting his grassroots supporters by joining forces across the political divide with centre-right Ciudadanos.

Any coalition talks could take weeks or months and might end in deadlock, plunging Europe's fifth largest economy into a new period of uncertainty as the continent wrestles with the complexities of Brexit and other challenges.

Concerns at home and abroad that Vox, a newcomer far-right party, would gain a share of power unprecedented since Spain's return to democracy in the 1970s failed to materialise. It won 24 seats, fewer than expected, and split the right-wing vote.

For many observers, the Podemos option appears Sanchez's likelier path, even with the two parties 11 seats short of a majority. Podemos leader Pablo Iglesais said he would happily enter a coalition.

"The chances of (Sanchez) getting a government (with Podemos are) at 90 percent, or better, but the chances of him passing the budget are 40:60," said Javier Diaz-Gimenez, economics professor at business school IESE.

Vox, the first party of that political hue to sit in parliament in significant numbers since late dictator Francisco Franco died in 1975, splintered the right-wing vote to leave the mainstream conservative People's Party (PP) languishing on just 66 seats, its worst result since the early 1980s.

The PP, along with the Socialists, had dominated the political landscape since Franco's death.

"It's clear that the fragmentation of the right has hurt the PP most, and it has paid the price for its corruption scandals," said Enrique Quemada, chief executive of investment bank ONEtoONE.

Sanchez took office last June after the then-governing PP lost a confidence vote called over the involvement of party members in corruption. He called Sunday's election when his budget failed to get through parliament after Catalan separatists refused to back it.

If Sanchez teams up with far-left Podemos, he would probably also need to cut another deal with the Catalans to secure an absolute majority.

While Sanchez has ruled out any negotiations on Catalan independence, any deal with the separatists would rake over the coals of the most divisive topic of an often tense election campaign that was dominated by issues of national identity.

Under Spanish electoral law, a new government requires an absolute majority in parliament to take office in a first round of voting.

In any second round, Sanchez would need only a simple majority to get his government voted in, which the Socialists and Podemos could do with backing of all regional parties except the Catalans, plus one abstention.

The separatist lawmakers are at the sharp end of Catalonia's independence drive, and precipitated a constitutional crisis in 2017 by unilaterally declaring independence after a referendum that authorities had banned. Several are on trial for sedition.

The pro-independence movement saw its negotiating power boosted on Sunday as its lawmakers won 22 seats.

"The ERC (main separatist party) will not want another election right now, so they will let (Sanchez) govern by abstaining," said ISES's Diaz-Gimenez.

"After that there'll be a ruling on the Catalan issue... and it could be permanent sabotage... I'm expecting another election by the end of the year or early next year."

Sanchez might instead try to cut a deal with Ciudadanos. The two parties together would have an absolute majority and speculation has persisted that they might team up.

Sanchez has not ruled out that option, though it appeared less likely after Ciudadonos leader Albert Rivera repeated after the election that he would be in the opposition.

Such a tie-up, though favoured by many in the markets, would also risk alienating many of the Socialists' core supporters.

Market reactions to the election result were mixed. Spanish stocks lagged broader European markets early on Monday but the spread of its benchmark government bond over its German equivalent tightened.

(Except for the headline, this story has not been edited by NDTV staff and is published from a syndicated feed.)
Comments
Pedro SanchezSpain electionsSocialists