Zu Sayn-Wittgenstein-Sayn, who lives in England, wants an "injunction and damages" due to "a continuous and ongoing campaign of harassment" against her. 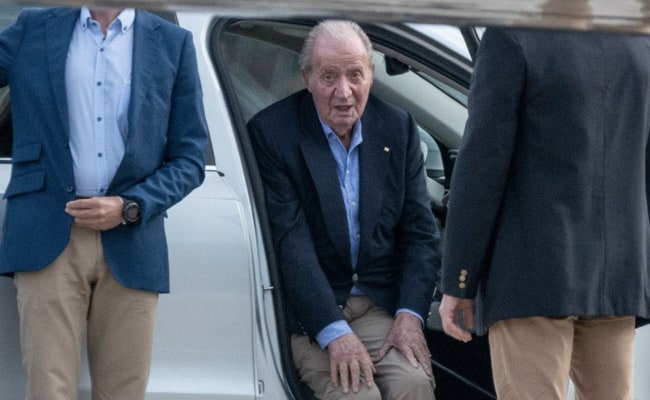 Juan Carlos still faces a court battle over claims made about his conduct. (File)

Three appeal judges in London on Tuesday ruled that the former mistress of Spain's ex-king Juan Carlos I could not sue him for harassment in the English courts for the period while he was on the throne.

The judges said in a written judgment that he was "immune from the jurisdiction" in England and Wales until his abdication in 2014.

That means that Corinna zu Sayn-Wittgenstein-Sayn can still pursue the 84-year-old former monarch in the English courts for his alleged behaviour after that time.

Zu Sayn-Wittgenstein-Sayn, who lives in England, wants an "injunction and damages" due to "a continuous and ongoing campaign of harassment" against her.

She claims the campaign began in 2012, following the "break-up of an intimate romantic relationship", and continues to this day.

She filed a harassment suit in London in 2020, alleging he pressured her to return gifts worth 65 million euros ($65 million), including works of art and jewellery.

Her legal representatives called Tuesday's ruling "disappointing", but added it only affected a narrow part of their case.

"The judgment applies to a very narrow issue. It concerns only the period when Juan Carlos was the reigning King of Spain," he added.

"The overwhelming part of Corinna's claim, from 2014, remains unaffected and should proceed to trial."

Juan Carlos, listed in court under his full name Juan Carlos Alfonso Victor Maria De Borbon y Borbon, has not appeared at hearings so far and strenuously denies any wrongdoing.

In March, the High Court in London fully rejected Juan Carlos's claim that English courts had no jurisdiction to hear the case because he had state immunity as a royal.

Judge Matthew Nicklin said that "whatever special status the defendant retained under the law and constitution of Spain, he was no longer a 'sovereign' or 'head of state' so as to entitle him to personal immunity".

He challenged the ruling and took the case to the Court of Appeal.

Court submissions claim Juan Carlos, who is married, was in an "intimate romantic relationship" with the divorcee from 2004 to 2009 and showered her with gifts.

She alleged that Juan Carlos began harassing her after their relationship broke down, using threats, break-ins at her properties and surveillance.

Gunshots were fired at and damaged security cameras at the front gate of the property, she alleged, accusing the former king of being angry at her refusals.

The couple's relationship became known in 2012, when the monarch broke a hip while on holiday in Botswana with Zu Sayn-Wittgenstein-Sayn and had to be flown home, sparking public anger during a period of record unemployment in Spain.

Two years later, dogged by the scandals and health problems, Juan Carlos abdicated at the age of 76 in favour of his son Felipe VI, who has now publicly distanced himself from his father.

Juan Carlos went into self-imposed exile in the United Arab Emirates in 2020.

The pair attended the state funeral of Queen Elizabeth II in September and were seated together.

Juan Carlos was protected for decades by his huge popularity as a key figure in the democratic transition following the death of dictator Francisco Franco in 1975.

The excesses of the monarch only came to light in the last years of his reign, triggering a string of investigations over corruption scandals.