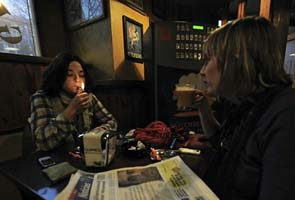 Madrid: The tapas bar -- that smoky, noisy and bustling Spanish success story that combined delicious morsels with good wine within a welcoming atmosphere and spawned imitators across the world -- is now smoke-free. So are restaurants, discotheques, casinos, airports and even some outdoor spaces.

Spain on Sunday introduced an anti-smoking law that is likely to turn the country -- the EU's fourth largest tobacco producer -- from a cigarette-friendly land abounding with smoky bars and restaurants, into one of Europe's most stringently smokeless.

The law prohibits lighting up in enclosed public places, although hotels are allowed to reserve 30 percent of their rooms for smokers. Outside, smoking it banned in open-air children's playgrounds and at access points to schools and hospitals.

"It's a step that should have been taken four years ago, but I think the government got cold feet," said bakery worker Inma Amantes Ramos, 29.

Parliament approved an anti-smoking law in 2006 that prohibited smoking in the workplace but allowed bar and restaurant owners with premises under 100 square meters (1,100 square feet) to decide whether to allow smoking or not, and almost all permitted it.

Larger restaurants were allowed to build hermetically sealed smoking sections, but now those spaces can no longer be used for smoking after a parliamentary commission voted down such an option.

Most critics said the 2006 law had been a failure. Health Minister Leire Pajin said around 50,000 people died each year in Spain as a result of smoking-related illnesses, with around 1,200 of those being nonsmokers who inhaled secondhand smoke.

By 2012 all of the EU's 27 member states should have banned smoking in enclosed zones.