These speeding objects, some of which top out at 18,000 mph, can circle the globe for hundreds of years. 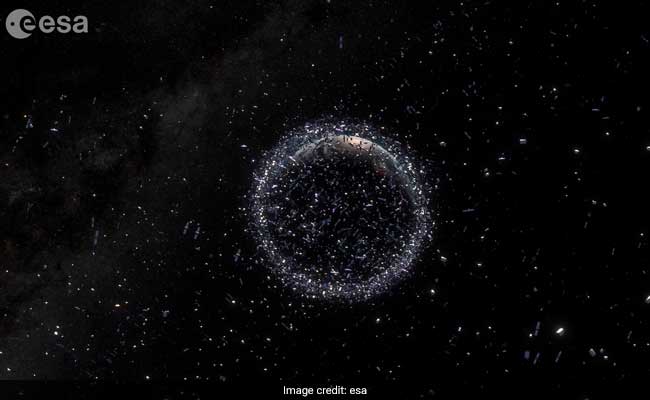 The clutter in low-earth orbit has grown more rapidly over the past decade.

Danger lurks in Earth's orbit as thousands of rogue objects speed around the planet-and you can't exactly call a guy with a truck to come sweep it all up.

These aren't stray pebbles-they're bits and pieces of all the junk we've shot up there in the 60 years since Sputnik, from tiny specks of metal to larger, conversation-enders-all traveling thousands of miles per hour. A basic step for space operators is to track debris and steer vehicles clear, be they unmanned satellites, rockets with humans, or even the International Space Station. In the future, however, some altitudes may require active cleaning measures, like a well-meaning relative sent to empty out an uncle's garage before it becomes a fire hazard.

"It's very easy to get something into orbit," said Bill Ailor, a research fellow at Aerospace Corp. "It's the dickens to get it out."

These speeding objects, some of which top out at 18,000 mph, can circle the globe for hundreds of years. Meanwhile, the clutter in low-earth orbit has grown more rapidly over the past decade. In January 2007, the Chinese government destroyed an aged weather satellite in a missile test, creating an estimated 2,500 pieces of new debris. That was followed by the February 2009 collision of a defunct 1,900-pound Russian Cosmos satellite with a 1,200-pound Iridium Communications Inc. satellite. That crash, 490 miles above Siberia, generated even more orbiting waste, much of which now blankets the planet.

"Thirty years from now, it can be a big problem."

Over time, this space detritus steadily collecting around the planet, amid more satellite launches and periodic collisions, may well approach a critical mass.

The accelerated accumulation of garbage up there raises the possibility of a "collision cascading" effect called the Kessler Syndrome. Named after Donald Kessler, a NASA astrophysicist who described the scenario in a 1978 paper, this phenomenon occurs when flying junk collides and begets more junk, and so on. Eventually, low-earth orbit becomes commercially dubious. (Think Hollywood's Gravity, without the science fiction drama.)

As government-sponsored space exploration slowly gives way to private industry, the business of tracking what's already up there has gone commercial, too. Now, there are some companies contemplating ways to start clearing out our big garage in the sky.Everyone who has thought about this problem for a few minutes agrees it's atrociously expensive to launch satellites merely to intercept and nab junk. This nascent field of inquiry has at least two cardinal rules: Create no further debris and mind the budget. Most prefer to make the Earth's atmosphere part of the solution by nudging space garbage into a fiery demise.Here are a few of the approaches to junk removal being studied.

The thinnest space craft you've ever seen, the 3 foot by 3 foot Brane Craft weighs just 100 grams. It is the brainchild of Siegfried Janson, a senior scientist at Aerospace Corp., a space researcher and defense contractor based in El Segundo, California. The craft would encircle an object, adding sufficient drag to degrade its orbit and send it into the atmosphere. If it had sufficient fuel, the vehicle would then pursue a second object.

Last month, NASA's Innovative Advanced Concepts Program awarded Aerospace a further $500,000 grant to continue researching the Brane Craft. Made of Kapton, an advanced film that's widely used in space vehicles, the Brane Craft is less than half the thickness of a human hair-advancing a design goal "to get rid of one dimension," Janson said in a March interview at Aerospace's headquarters. The craft has tiny solar cells, an ionic liquid propellant, navigation and "electro-spray thrusters" printed on the Kapton sheet, with one-third of the total mass given to fuel.

"What's scaring scientists in general is the fact that the [debris] population is increasing in time," Janson said. "Twenty years from now and 30 years from now, it can be a big problem."

These sheets would be launched in a 5-foot-diameter canister, with as many as 500 of them packed together. Janson estimates that the craft must be able to sustain 40 punctures from objects traveling faster than bullets and still continue to operate. The thin vehicle must also be hardened to withstand the effects of space radiation.

A solar-electric tug boat carrying disposable rockets, it's powered by a plasma motor to maneuver near large pieces of debris. Small thrusters are attached to a service vehicle on the tug, launching it to a rendezvous with the space junk. It connects with the object and then returns the debris for either a controlled burn above the South Pacific or placement in a higher, "graveyard" orbit.

"What we are doing is developing a propulsion system that can enable you to do this multiple times," said Ad Astra Chief Executive Officer Franklin Chang Diaz, a physicist and former NASA space shuttle commander. "That's what makes it different from other orbital debris removal concepts. The plasma engine enables you to do multiple removals in a single mission."

The plasma rocket is key to the debris sweeper and Ad Astra's other ideas for deep space exploration. It plans a 1-hour firing test in June at its Webster, Texas headquarters, followed by a full-power, 100-hour burn in 2018.

The Japanese Aerospace Exploration Agency is researching the potential of a long, electrified space tether to propel objects from orbit.

A first test of the Kounotori Integrated Tether Experiment (KITE) went awry in January when the 2,300-foot cable failed to deploy after a JAXA mission to re-supply the space station. The line is designed to generate a magnetic field and attract space debris, then propelling them out of orbit and into the atmosphere for destruction. The tether was built with the expertise of a Japanese fishing net maker,  Nitto Seimo.

Satellites aren't used to collect space refuse because they're extremely expensive in terms of fuel cost. The space sweeper/sling-sat approach from Texas A&M University researchers turns this on its head, employing a satellite powered in part by the very debris it seeks to eradicate.

Promoted
Listen to the latest songs, only on JioSaavn.com
The craft would absorb space garbage and then eject it, gaining power from both interactions which it can use to fly to the next waste target. Using two "slings" at the end of two adjustable arms on the satellite would also allow sweeper operators to determine the best time and trajectory for releasing the debris.