South Korea Sends Train Into North Korea, For The First Time In A Decade

The train pulled six cars carrying dozens of South Korean officials and experts, who will undertake an 18-day, 750-mile survey of railway tracks in the North. 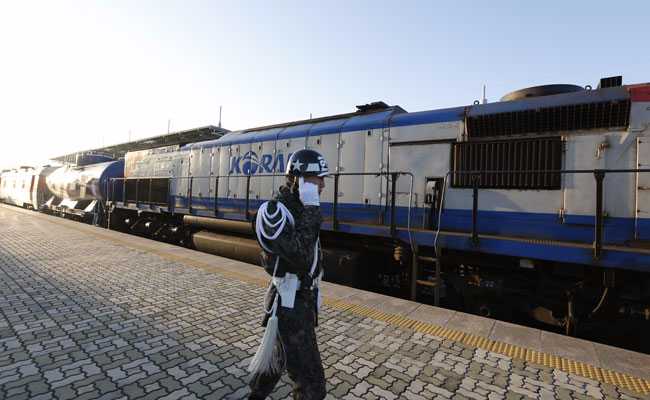 Seoul is pushing ahead with a plan to reunite the two railway networks despite UN sanctions. (AFP)

A South Korean train rolled across the heavily militarized frontier into North Korea for the first time in a decade on Friday, as Seoul pushed ahead with a plan to reunite the two railway networks despite heavy U.N. sanctions.

The train pulled six cars carrying dozens of South Korean officials and experts, who will undertake an 18-day, 750-mile survey of railway tracks in the North. The journey required special permission from the United Nations to carry equipment and fuel into the North despite the sanctions regime.

Seoul plans to hold a ground-breaking ceremony before the end of the year on a plan to establish road and rail links between the two Koreas, first agreed upon by the countries' two leaders at a summit in April. But the project can't go beyond symbolic gestures to become reality unless sanctions are lifted.

Nevertheless, with talks between the United States and North Korea stalling, the government in Seoul is keen to show progress in its own peace process with Pyongyang.

"The inter-Korean railway connection project is intended to overcome division and open a new future of the Korean Peninsula," Unification Minister Cho Myoung-gyon said at a ceremony at Dorasan Station near the border, according to pool reports. 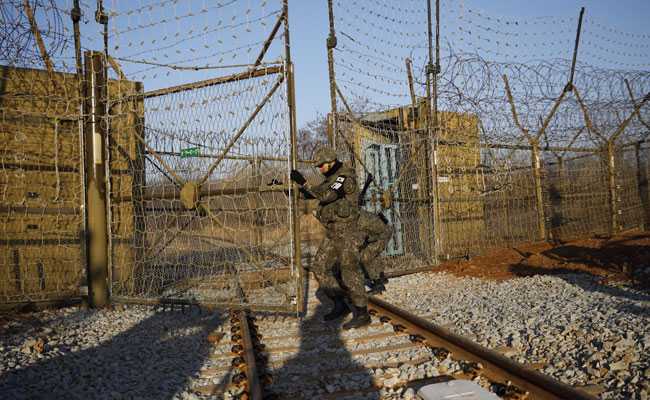 The journey required special permission from the United Nations to carry equipment and fuel. (AFP)

Cho also promised to maintain close consultation "with related nations" - in other words, the United States - so that the project proceeds with international support.

After whistling twice, the South Korean train slowly traveled toward North Korea's Panmun Station, near the town of Kaesong, where the cars would be reconnected to a North Korean engine.

The survey will run in two stages. The first will go through central North Korea and along the northwestern coast to the city of Sinuiju near the Chinese border. The second phase will go from an area near the Mount Kumgang tourist region and along the east coast up to a riverside station near the border with Russia. The train will include passenger and sleeping cars as well as a power-generator car and a fuel-tank. 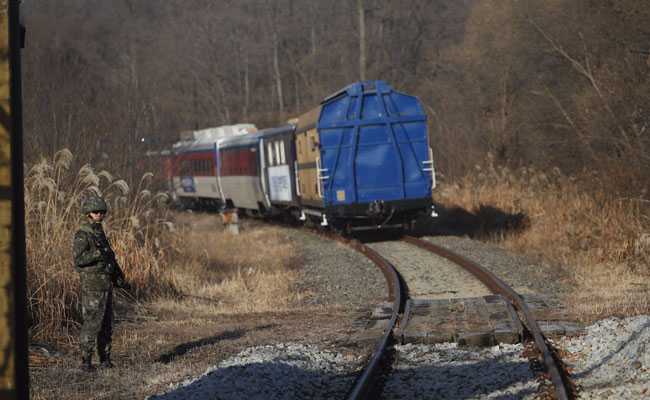 Freight services ran between the two Koreas from December 2007 until November 2008.

"You will visit train stations and cross hills and rivers in North Korea no outsiders have visited," Cho told the survey team.

Freight services ran between the two Koreas from December 2007 until November 2008 to support factories in a joint economic zone at Kaesong in North Korea. But the line was cut in 2008 and the Kaesong park eventually closed in 2016 as relations deteriorated.

The contrast between North Korea's slow and decrepit network and the South's gleaming bullet trains could hardly be greater. During his April meeting with South Korean President Moon Jae-in, North Korean leader Kim Jong Un admitted the railways in his country were in an "embarrassing" state.

Moon has since outlined ambitious plans to set up an East Asian Railway community, as a first step towards the sort of regional economic integration Europe established after World War II.

Seoul wanted the railway survey to take place earlier this year, but the plan was initially blocked by the U.S.-led United Nations Special Command in South Korea.

Strains have emerged in the relationship between Seoul and Washington over how to handle North Korea, with some members of the U.S. administration worried that South Korea is moving too fast down the path of rapprochement, and some South Koreans frustrated that the United States is making what they see as unreasonable demands of Pyongyang, while maintaining harsh sanctions.