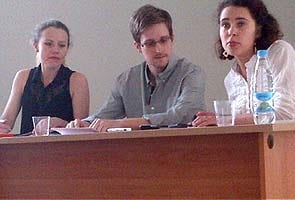 Montevideo: South American leaders sent a tough message to Washington on Friday over allegations of US spying in the region and to defend their right to offer asylum to fugitive US spy agency contractor Edward Snowden.

Capping two weeks of strained North-South relations over the Snowden saga, presidents from the Mercosur bloc of nations met in Montevideo, Uruguay. Complaints against the United States were high on the agenda.

Venezuelan President Nicolas Maduro, at the close of Friday's summit, said the block would issue a statement officially "rejecting" US espionage in the region and "affirming the right to asylum as a fundamental right."

"This global espionage case has shaken the conscience of the people of the United States and has upset the world," Maduro said. "It raises key issues of political ethics."

"Any act of espionage that violates human rights, above all the basic right to privacy, and undermines the sovereignty of nations, deserves to be condemned by any country that calls itself democratic," Brazilian President Dilma Rousseff told reporters on arrival at the meeting.

Rousseff, who was imprisoned and tortured under military rule in Brazil in the early 1970s, said the rights issue was particularly important for South American countries that lived under dictatorships for years and are now democracies.

The meeting began as reports emerged that Snowden plans to eventually travel to Latin America after seeking temporary asylum in Russia. Leftist leaders in Venezuela, Bolivia and Nicaragua have offered him asylum.

Leaders throughout the region are furious over reports that the US National Security Agency targeted most Latin American countries with spying programs that monitored Internet traffic, especially in Colombia, Venezuela, Brazil and Mexico.

"This is the world we live in; a world with new forms of colonialism," Argentine President Cristina Fernandez said in her closing remarks in Montevideo. "It is more subtle than it was two centuries ago, when they came with armies to take our silver and gold."

Colombia, Washington's closest military ally in Latin America, and Mexico, its top business partner, joined the chorus of governments seeking answers after the allegations were published by a leading Brazilian newspaper on Tuesday.

Washington is demanding Snowden's arrest on espionage charges after he divulged extensive, secret US surveillance programs. Stuck in the transit area of Moscow's international airport since late June, he has been seeking asylum in various countries.

Snowden said in a letter posted on Friday on the Facebook page of the New-York based Human Rights Watch that the United States has been pressuring countries not to accept him. And US President Barack Obama has warned of serious costs to any country who takes him in.

Despite their public offers of asylum and fiery rhetoric, few in Latin America seem particularly keen to welcome Snowden and risk damaging trade and economic ties with Washington.

Cuba and Venezuela are both in a cautious rapprochement with the United States that could be jeopardized if they helped Snowden.

Still, leaders recalled that many of their own citizens sought asylum abroad during the military dictatorships of the Cold War era.

South American leaders rallied in support of Bolivian President Evo Morales last week after he was denied access to the airspace of several European countries on suspicion the 30-year-old Snowden might be on board his plane as Morales flew home from a visit to Russia.

Promoted
Listen to the latest songs, only on JioSaavn.com
Bolivia is an associate member of Mercosur and Morales attended Friday's meeting.