19-Month-Old Son Of Australian, Who Died In Fire, Gets Highest Honours 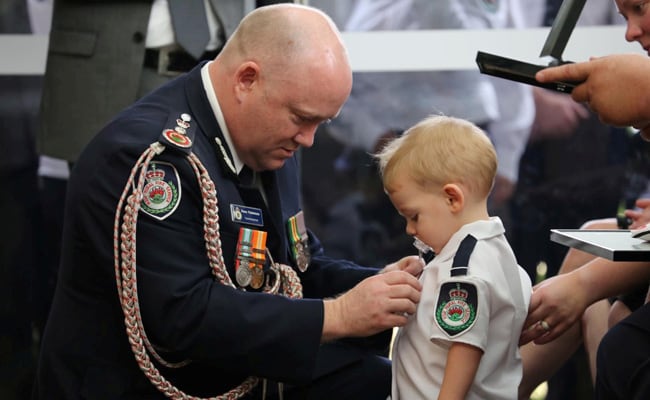 The toddler son of a volunteer firefighter killed battling wildfires in Australia received one of the service's highest honours on behalf of his father during an emotional funeral on Thursday.

Harvey's father, 32-year-old Geoffrey Keaton, was one of three volunteer firefighters killed in recent weeks. Keaton and a colleague died last month when a burnt tree fell in the path of their fire truck, causing it to roll.

The third firefighter died this week in what was described by authorities as a "fire tornado".

Dozens of firefighters saluted and formed a guard of honour as Keaton's hearse drove into a Sydney cemetery, according to pictures of the funeral posted online by the fire service.

A mug placed on the coffin had a picture of father and son stick figures and the inscription: "Daddy I love you to the moon and back!"

Another photograph from the funeral showed Harvey being held by his mother, Keaton's fiance Jess Hayes, as they looked at a portrait of the firefighter atop his coffin.

NSW state Royal Fire Services Commissioner Craig Fitzsimmons, who has been giving daily briefings on the crisis, knelt down to pin the medal on Harvey's shirt.

Australian Prime Minister Scott Morrison, who has faced some criticism for his response to the fires, also attended.

The NSW RFS said on Twitter it had "farewelled one of our own".

Eight people have been killed by wildfires in the eastern states of New South Wales and Victoria since Monday, and 18 are still missing.

Fierce fires have flared around Australia for several weeks, prompting mass evacuations, devastating towns and destroying homes. They have also raised questions about Australia's readiness to deal with climate change.

(Except for the headline, this story has not been edited by NDTV staff and is published from a syndicated feed.)
Comments
Australia bushfire firefighterAustralian firefighters deadposthumous