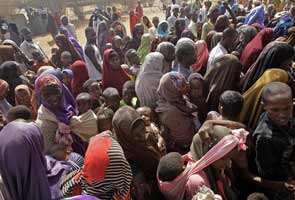 Dadaab, Kenya: As the Islamic holy month of Ramadan begins, Faduma Aden is fasting all day even though she doesn't have enough food to celebrate with a sundown feast. The Somali mother of three, who fled starvation in her homeland, says she fasts because she fears God.

Muslims around the world mark sundown during Ramadan with extravagant dinners after not eating from sunrise to sundown. That kind of nighttime celebration is unthinkable this year for most Somalis, who are enduring the worst famine in a generation.

And even though Islam allows the ailing to eat, for many Somalis it's a matter of faith to participate in Ramadan's fast.

"It hard for me to fast, but I did fast for fear of God," said Aden, who is among tens of thousands who have made the arduous journey, often on foot, to this refugee camp in neighboring Kenya.

Others, like Mohamed Mohamud Abdulle, are ashamed they don't have food "to console the soul" at sundown after fasting all day.

"How will I fast when I don't have something to break it?" asked Abdulle. "All my family are hungry and I have nothing to feed them. I feel the hunger that forced me from my home has doubled here."

For much of the Muslim world, Ramadan this year falls at a time of political upheaval. Food prices typically spike during the Muslim religious month, and the elaborate dinners many in the Middle East put on to break the daily fast drive a deep hole in household budgets.

Fleeing Somalis say they have already been forced by famine to fast for weeks or months, without the end-of-day meal to regain their strength.

"I cannot fast because I cannot get food to break it and eat before the morning," said Nur Ahmed, a father of six at a camp for displaced people in the Somali capital, Mogadishu, whose wife died last year during childbirth.

Sheik Ali Sheik Hussein, a mosque leader in Mogadishu, called it "worrying" that many Somalis cannot fast because they are already weak from hunger and don't have food to regain their strength after sundown.

"We have asked all Muslims to donate to help those dying from hunger," he said. "Muslims should not be silent on this situation, so we shall help if Allah wills."

At a hospital run by the International Committee of the Red Cross in the Dadaab camp, clinician Muhammed Hussein breaks away from examining a patient to note that his Ramadan fast gives him greater understanding of the suffering of famine victims.

"It gives you a lot of sympathy when you yourself feel hungry, you will understand the pain of someone who has not eaten... With this kind of severe malnutrition, people have no energy to walk, they have been walking from Kismayo in Somalia to this place. It gives you that heart to feel mercy for the people who are suffering."

In a Ramadan statement Monday, President Barack Obama said fasting can be used to "increase spirituality, discipline, and consciousness of God's mercy." Obama said now is a time for the world to come together to support famine relief efforts.

"The heartbreaking accounts of lost lives and the images of families and children in Somalia and the Horn of Africa struggling to survive remind us of our common humanity and compel us to act," Obama said.

Some in the communities around the Dadaab refugee camp are stepping forward to help. At the Dagahaley refugee camp, part of the larger Dadaab camps, three distribution centers run by local elders provide food and money each day for more than 1,000 families and individuals.

Moved by tragic scenes of haggard mothers and emaciated children, Somalis in the diaspora are wiring hundreds of dollars to community leaders so they can buy food and clothes for the new arrivals.

"The hunger and suffering faced by the new arrivals have moved us into action," said Hussein Sheik Mohamed, part of a team of volunteers who accepts donations from Somalis around the world and distributes aid.

The Dadaab initiative started with people at nearby mosques who wanted to respond to the needs of refugees pouring into the camp. They called former refugees to help new arrivals with whatever they can find: Food, money, clothing and mattresses were donated.

The U.N. says more than 11 million people in the Horn of Africa need food aid, but 2.2 million are in peril in a region of south-central Somalia controlled by the al-Qaida-linked militant group al-Shabab that is largely inaccessible to aid groups.

In a bit of good news, however, the International Committee of the Red Cross said Monday it was now distributing food to 162,000 people in south-central Somalia - the first large-scale distribution in the region since the beginning of the year.

"This operation demonstrates the ICRC's ability to deliver emergency aid directly to the people affected in southern Somalia," said Andrea Heath. "But this distribution assists only a small percentage of those in need. More aid will be required to help the population bridge the gap until the next harvest in December."

Salad Salah is one of those still in need. He fled to a refugee camp in Mogadishu, and said that participating in Ramadan this year would be a form of "suicide."

Promoted
Listen to the latest songs, only on JioSaavn.com
"We wouldn't like to miss Ramadan but the conditions here say we must," he said.