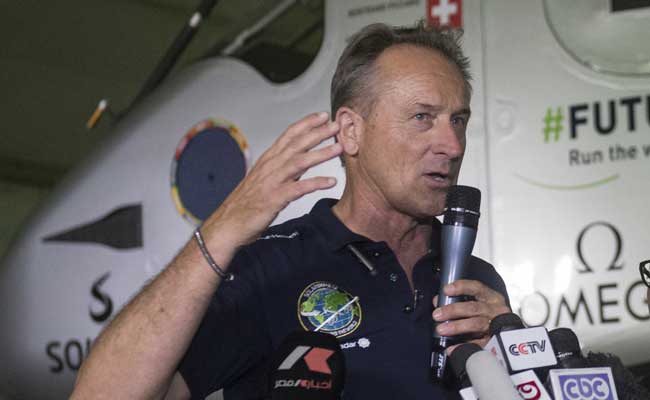 Geneva: Swiss pilot Andre Borschberg lives by the rallying cry of "making the impossible possible", and now he and his compatriot Bertrand Piccard have done just that.

The pair completed the first round-the-world flight with a fully sun-powered plane, Solar Impulse 2, when Piccard landed in Abu Dhabi on July 26 and wrapped up a journey that started 16 months ago.

During their odyssey, the two pilots alternated at the controls of the single-seat plane, with Borschberg in the cockpit for the longest leg of the journey.

With his 8,924-kilometre (5,545-mile) flight from Japan to Hawaii last year, which lasted 118 hours, or nearly five full days, he entered aviation history with the world's longest uninterrupted flight.

The 63-year-old smashed the previous record for the longest non-stop solo flight of 76 hours and 45 minutes set by US adventurer Steve Fossett in 2006.

It was far longer from Borschberg's first sky-shattering flight. He previously carried out the first-ever day and night flight in a solar aircraft, flying Solar Impulse 2's predecessor, Solar Impulse 1, for 26 hours straight in 2010.

Borschberg, also an entrepreneur with a passion for exploration, has described his Pacific crossing as "an interior journey" and an "extraordinary occasion to discover myself".

Alone in the cockpit, Borschberg could only sit or lie down and could sleep for no more than 20 minutes at a time, wearing a vibrating armband to wake him up in case of any anomaly.

He attributes his mental strength, which has been vital when flying solo for days on end, to yoga and meditation, which he usually practises in the garden of his home in Nyon, on the shores of Lake Geneva.

But he also practised in the cockpit of Solar Impulse 2, transforming his tiny bench into a yoga mat and using specialised postures custom-tailored for him by his personal yogi, Sanjeev Bhanot.

Born in Zurich, Borschberg says he began dreaming of flying and of pushing boundaries as a young child.

He trained as a Swiss army pilot, learning to fly a range of jets and other aircraft, and in his spare time racked up other professional fixed wing and helicopter licences and practised aerobatics.

He also earned a degree in mechanics and thermodynamics from the Ecole Polytechnique Federale de Lausanne in Switzerland, followed by master's degrees in management studies at MIT in the United States.

After working as a fighter pilot, Borschberg entered the civilian sphere in 1983, taking a job as a consultant for McKinsey out of Zurich, New York and Tokyo.

He later decided to go it alone, launching two internet start-ups and co-founding a company in the field of microprocessor memories.

Borschberg, a married father of three, says on his website that it was "serendipity" that brought him and Piccard together in 2003.

"When the request came... to help lead the seemingly impossible mission -- to create the plane and help fly it -- there was no saying no," he said.

The solar plane project offered a chance "to take part in a once-in-a-lifetime adventure and contribute to a new milestone in aviation".
The pair co-founded the Solar Impulse company, which Borschberg runs as the chief executive.

Despite his imposing stature and athletic build, he often appears overshadowed by his more famous associate, but Piccard has insisted they are both equally important to the project.

"We are friends. Andre takes more responsibility for the interior of the project, and I take the exterior," he told Hebdo magazine in 2014, insisting that "one without the other just does not work".

"My fame is not there to suffocate Andre, but to carry the project," Piccard said.

(This story has not been edited by NDTV staff and is auto-generated from a syndicated feed.)
Comments
Andre BorschbergBertrand PiccardSolar ImpulseSolar Impulse 2Solar Impulse 2 lands