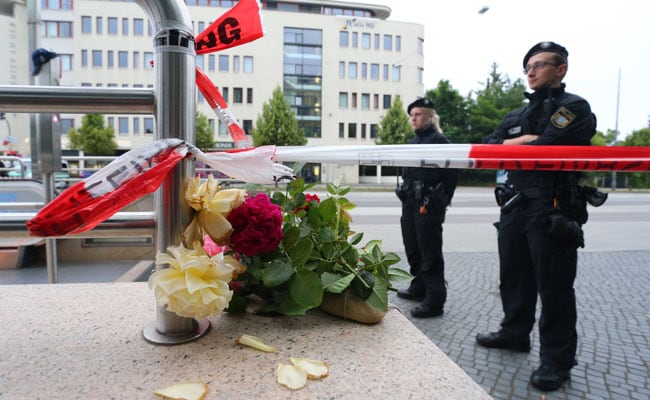 Police officers stand at the entrance of the subway station near the attacked shopping mall. (AFP)

Munich: Social networks were both a curse and a blessing in the deadly shopping mall shooting in Munich, as police sometimes found themselves chasing fictitious leads and false alarms.

The 18-year-old gunman, a German-Iranian named David Ali Sonboly, also used the internet to plan and carry out his crime, in which he killed nine people and wounded 16 others.

Nevertheless, the social networks provided a valuable source of information and solidarity for the city's frightened population during the long lockdown while the incident was going on.

As soon as the terrifying events started to unfold late on Friday afternoon, Munich's police were quick to take to Twitter to try to keep the public informed about the confusing and fast-evolving situation.

"We're working as fast as we can to apprehend the attackers," they tweeted in German, English and French.

"The suspects are still on the run. Please avoid public places. #munich #gunfire".

But as social network users began to tweet and re-tweet their own experiences and versions of events, it rapidly became difficult for the police to retain an overview and in some cases differentiate between fact and fiction.

At one point, for example, there were a flurry of reports of another shooting in the city centre, on the pedestrianised square called the Stachus not far from the main station.

But those reports turned out to be false.

Another headache for police were eye-witness accounts, photos and videos that were rapidly being uploaded onto the web.

Police were concerned that the attackers- at that point, they erroneously believed there might have been more than one- could track where officers were being deployed and in what numbers, thereby making them easier to evade.

In the end, the police desperately tweeted: "Please don't take photos or video of police action in order to avoid any helpful information for the suspects".

Police chief Hubertus Andrae told ZDF public television late Saturday that the speed and volume of information which needed to be verified was "challenging."

The official Twitter account proved useful in keeping the public informed about the latest confirmed facts, such as the number of victims or the time and place of the next press conference.

But police themselves inadvertently helped fan some of the speculation by tweeting, for example, that the theory of a possible terrorist act was being looked at.

At one point, police felt compelled to publish a plea, "Please restrain any speculations- that would help us a lot!"

Lured Via The Internet

"Nowadays, in the age of social networks, it is no longer the police who have control over the quantity and timing of the release of information, but everyone," said Interior Minister Thomas de Maiziere.

"There are sometimes advantages in that, as can be seen in the number of investigations that have been brought to a successful conclusion thanks to photos and videos taken by private individuals," he told a news conference.

In the United States, for example, the investigation into the Boston Marathon attacks in 2013 was able to progress quickly as a result of such information.

"But it's clear that rumours can spread rapidly and that isn't always conducive to an accurate evaluation of the situation," the minister said.

He praised the "fair" and "comprehensive" way in which police had communicated the recent attacks in Europe.

According to the interior ministry, the Munich gunman may have hacked a Facebook account to lure some of the victims to the McDonald's fast-food outlet where the shooting began by offering them special discounts.

"I will give you whatever you want, for not a lot of money," the online invite read, according to German media reports.