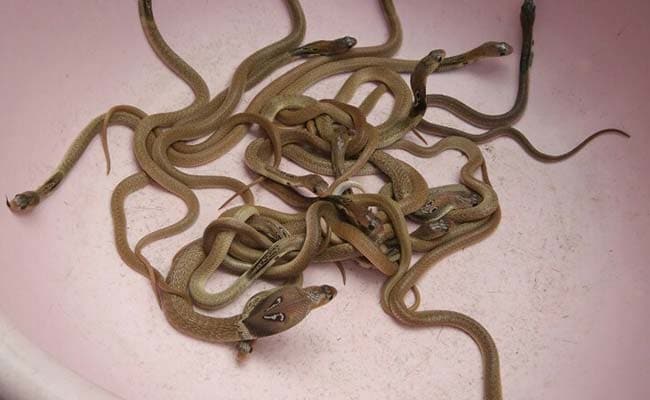 The baby cobras were 16 to 27 centimetres long and not highly toxic. (Representational Image)

Beijing: As many as 180 baby cobra snakes have escaped from a breeding farm in China's southwest Sichuan province, creating scare among people, officials said today.

People in Emeishan city's Luomu township reported seeing the snakes, according to Zhou Minghua, a spokesman with the city forestry bureau.

Out of the 180 baby cobra snakes belonging to the Jiulong breeding farm, 23 are still at large. By this morning, 120 of the snakes were caught, 30 killed and seven found dead. Search for the final 23 was on, he said.

Officials distributed alcohol and realgar to people so they could repel the snakes. Antitoxic serum was also prepared in case of injuries caused by the cobras.

The baby cobras were 16 to 27 centimetres long and not highly toxic, Zhou said.

He asked people not to panic and to contact local forestry rangers and firefighters upon spotting the snakes, state-run Xinhua news agency reported.

Promoted
Listen to the latest songs, only on JioSaavn.com
Zhou said it was not easy for farm-bred cobras to survive in the wild. He said other snakes in the farm had been sent to a safer place, facilities had been made secure, and the farm's surrounding area had been disinfected.