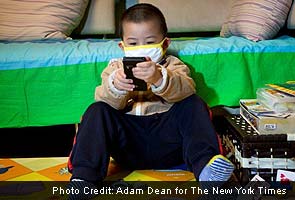 Beijing: The young boy's chronic cough and stuffy nose began last year at the age of 3. His symptoms worsened this winter, when smog across northern China surged to record levels. Now he needs his sinuses cleared every night with saltwater piped through a machine's tubes.

The boy's mother, Zhang Zixuan, said she almost never lets him go outside, and when she does she usually makes him wear a face mask. The difference between Britain, where she once studied, and China is "heaven and hell," she said.

Levels of deadly pollutants up to 40 times the recommended exposure limit in Beijing and other cities have struck fear into parents and led them to take steps that are radically altering the nature of urban life for their children.

Parents are confining sons and daughters to their homes, even if it means keeping them away from friends. Schools are canceling outdoor activities and field trips. Parents with means are choosing schools based on air-filtration systems, and some international schools have built gigantic, futuristic-looking domes over sports fields to ensure healthy breathing.

"I hope in the future we'll move to a foreign country," Zhang, a lawyer, said as her ailing son, Wu Xiaotian, played on a mat in their apartment, near a new air purifier. "Otherwise we'll choke to death."

She is not alone in looking to leave. Some middle- and upper-class Chinese parents and expatriates have already begun leaving China, a trend that executives say could result in a huge loss of talent and experience. There are also reports of foreign parents turning down prestigious jobs or negotiating for hardship pay from their employers, citing the pollution.

There are no statistics for the flight, and many people are still eager to come work in Beijing, but talk of leaving is gaining urgency around the capital and on Chinese microblogs and parenting forums. Chinese are also discussing holidays to what they call the "clean-air destinations" of Tibet, Hainan and Fujian.

"I've been here for six years and I've never seen anxiety levels the way they are now," said Dr. Richard Saint Cyr, a new father and a family health doctor at Beijing United Family Hospital, whose patients are half Chinese and half foreigners. "Even for me, I've never been as anxious as I am now. It has been extraordinarily bad."

He added: "Many mothers, especially, have been second-guessing their living in Beijing. I think many mothers are fed up with keeping their children inside."

Few developments have eroded trust in the Communist Party as quickly as the realization that the leaders have failed to rein in threats to children's health and safety. There was national outrage in 2008 when more than 5,000 children were killed when their schools collapsed in an earthquake and hundreds of thousands were sickened in a tainted milk formula scandal. Officials tried to suppress angry parents, sometimes by force or with payoffs.

But the fury over air pollution is much more widespread and is just beginning to gain momentum.

Scientific studies justify fears of long-term damage to children and fetuses. A study published by The New England Journal of Medicine showed that children exposed to high levels of air pollution can suffer permanent lung damage. The research was done in the 1990s in Los Angeles, where levels of pollution were much lower than those in Chinese cities today.

A study by California researchers published last month suggested a link between autism in children and the exposure of pregnant women to traffic-related air pollution. Columbia University researchers, in a study done in New York, found that prenatal exposure to air pollutants could result in children with anxiety, depression and attention-span problems. Some of the same researchers found in an earlier study that children in Chongqing, China, who had prenatal exposure to high levels of air pollutants from a coal-fired plant were born with smaller head circumferences, showed slower growth and performed less well on cognitive development tests at age 2. The shutdown of the plant resulted in children born with fewer difficulties.

Analyses show little relief ahead if China does not change growth policies and strengthen environmental regulation. A Deutsche Bank report released in February said the current trends of coal use and automobile emissions meant air pollution was expected to worsen by an additional 70 percent by 2025.

Some children's hospitals in northern China reported an extraordinary number of patients with respiratory illnesses this winter, when the air pollution soared. During one bad week in January, Beijing Children's Hospital admitted up to 9,000 patients a day for emergency visits, half of them for respiratory problems, according to a report by Xinhua, the state news agency.

Parents have scrambled to buy air purifiers. IQAir, a Swiss company, makes purifiers that cost up to $3,000 here and are displayed in shiny showrooms. Mike Murphy, the chief executive of IQAir China, said sales had tripled in the first three months of 2013 over the same period last year.

Face masks are now part of the urban dress code. Zhang laid out half a dozen masks on her dining room table and held up a simple one with a picture of a teddy bear that fits Xiaotian. Schools are adopting emergency measures. Xiaotian's private kindergarten used to take the children on a field trip once a week, but it has canceled most of those this year.

At the prestigious Beijing No. 4 High School, which has long trained Chinese leaders and their children, outdoor physical education classes are now canceled when the pollution index is high.

"The days with blue sky and seemingly clean air are treasured, and I usually go out and do exercise," said Dong Yifu, a senior there who was just accepted to Yale University.

Elite schools are investing in infrastructure to keep children active. Among them are Dulwich College Beijing and the International School of Beijing, which in January completed two large white sports domes of synthetic fabric that cover athletic fields and tennis courts.

The construction of the domes and an accompanying building began a year ago, to give the 1,900 students a place to exercise in both bad weather and high pollution, said Jeff Johanson, director of student activities. The project cost $5.7 million and includes hospital-grade air-filtration systems.

Teachers check the hourly air ratings from the U.S. Embassy to determine whether children should play outside or beneath the domes. "The elementary schoolchildren don't miss recess anymore," Johanson said.

One American mother, Tara Duffy, said she had chosen a prekindergarten school for her daughter based in part that the school had air filters in the classrooms. The school, called the 3e International School, also brings in doctors to talk about pollution and bars the children from playing outdoors during increases in smog levels. "In the past six months, there have been a lot more 'red flag' days, and they keep the kids inside," said Duffy, a writer.

Duffy said she also checked the daily air quality index to decide whether to take her daughter to an outdoor picnic or an indoor play space.

Now, after nine years here, Duffy is leaving China, and she cites the pollution and traffic as major factors.

That calculus is playing out with expatriates across Beijing.

One American couple with a young child discussed the pollution when considering a prestigious foundation job in Beijing, and it was among the reasons they ultimately turned down the offer.

James McGregor, a senior counselor in the Beijing office of APCO Worldwide, a consulting company, said he had heard of an American diplomat with young children who had turned down a posting here. That was despite the fact that the State Department provides a 15 percent salary bonus for Beijing that exists partly because of the pollution. The hardship bonus for other Chinese cities, which also suffer from awful air, ranges from 20 percent to 30 percent, except for Shanghai, where it is 10 percent.

Promoted
Listen to the latest songs, only on JioSaavn.com
"I've lived in Beijing 23 years, and my children were brought up here, but if I had young children I'd have to leave," McGregor said. "A lot of people have started exit plans."