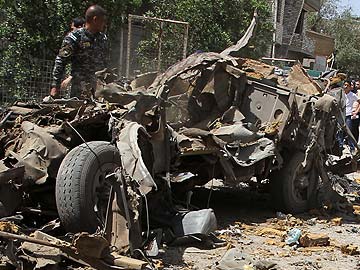 An Iraqi youth walks past the remains of a vehicle at the site of an explosion in Baghdad on April 9, 2014

The bomb blasts occurred at about 10:00 am (0700 GMT) in five neighbourhoods of Baghdad, as the country marked the 11th anniversary of the fall of the Iraqi capital during the US-led invasion that ousted dictator Saddam Hussein.

They came a day after Iraq's security forces said they killed 25 militants near Baghdad, amid worries that insurgents are encroaching on the city ahead of April 30 elections.

On Wednesday, three people were killed and eight wounded in the explosion of a car parked in the northern Baghdad neighbourhood of Kadhimiya, a health ministry official said.

"In Sadr City, in eastern Baghdad, a car bomb that exploded in a vegetable market killed one person and six wounded," the official said.

And two more people were killed and eight wounded when another bomb went off in car park elsewhere in the east of the capital city.

Violence across Iraq has killed more than 2,400 people this year, sparking fears the country is slipping back into the all-out sectarian fighting that plagued it in 2006 and 2007.

Promoted
Listen to the latest songs, only on JioSaavn.com
The bloodshed has been driven principally by anger in the Sunni Arab community over alleged mistreatment at the hands of the Shiite-led government and security forces, as well as spillover from the civil war in neighboring Syria.