Shooting reported near the White House 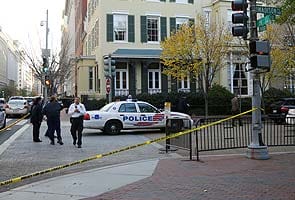 Police say it happened before 6:30 am on Friday near Lafayette Square in Washington.

Police say three suspects, including at least one with a gun, approached two people and tried to rob them.

D.C. police spokesman Araz Alali says the victims began following the suspects in their car, and that one of the suspects fired shots. No one was injured.

Mr Alali says no one was immediately in custody.
Comments
Whit House Shooting