The Bangladesh election campaign saw mass arrests of opposition activists and candidates and allegations of widespread rigging including ballot stuffing and voter intimidation. 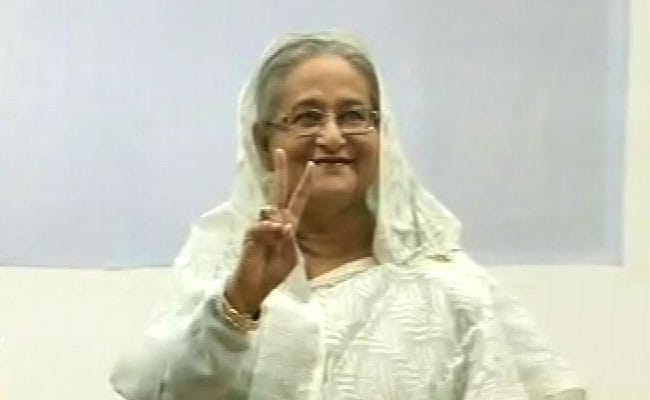 Sheikh Hasina was sworn in as Bangladesh's prime minister for a record fourth term. (File)

Sheikh Hasina was sworn in as Bangladesh's prime minister for a record fourth term Monday after a crushing election victory marred by deadly violence and claims of widespread rigging.

Hasina, 71, has presided over record economic growth in the South Asian country of 165 million people but critics have accused her of creeping authoritarianism.

Her ruling Awami League party and its allies won the December 30 elections by a landslide, securing 288 seats in the 300-seat parliament compared to just seven for the main opposition.

The campaign saw mass arrests of opposition activists and candidates and allegations of widespread rigging including ballot stuffing and voter intimidation.

The European Union has called for a probe into allegations of irregularities, saying "significant obstacles to a level playing field... tainted the electoral campaign and the vote."

The United States expressed concern about "credible reports of harassment, intimidation and violence".

The United Nations on Friday said there were indications that "reprisals" have targeted the opposition since the election, including physical attacks, arbitrary arrests, harassment, disappearances and filing of criminal cases.

The opposition, which last week boycotted the oath taking ceremony of the newly elected MPs, has demanded fresh polls under a neutral caretaker government -- something Hasina and the election commission have rejected outright.

President Abdul Hamid administered Hassina'a oath in a ceremony at the presidential palace, Bangabhaban. A 47-member cabinet with many new faces was also sworn in.

To her supporters, Hasina is known as Bangladesh's "mother of humanity" for allowing in hundreds of thousands of Rohingya refugees fleeing a military crackdown in neighbouring Myanmar in 2017.

Hasina was abroad in August 1975 when a group of renegade military officers assassinated her father, Bangladesh's first president Sheikh Mujibur Rahman, his wife and three sons.

She started her political career as a hero of the people, returning from exile in 1981 to take over as Awami League leader and beginning a long struggle to restore democracy in Bangladesh.

Hasina joined forces with Zia's BNP to help oust military dictator Hussain Muhammad Ershad in 1990 but the pair soon fell out and were branded the "Battling Begums".

Hasina was first elected prime minister in 1996 but she struggled to emerge from the shadow of her father during her first term and lost the 2001 contest.

She returned to power after winning the December 2008 polls by landslide, just months after she was imprisoned by a military-backed government on corruption charges.

She has been in power ever since, presiding over economic expansion of more than six percent every year since 2009. GDP growth last year was 7.86 percent and Hasina has promised to take that into double digits.

(Except for the headline, this story has not been edited by NDTV staff and is published from a syndicated feed.)
Comments
Sheikh HasinaBangladesh's prime ministerBangladesh elections