Nearly 2 years after she says she watched the man walk off the plane unhindered, Dvaladze sued Delta Air Lines in federal court Tuesday - unsatisfied with the frequent flier miles she says the airline offered for the inconvenience of a sexual assault. 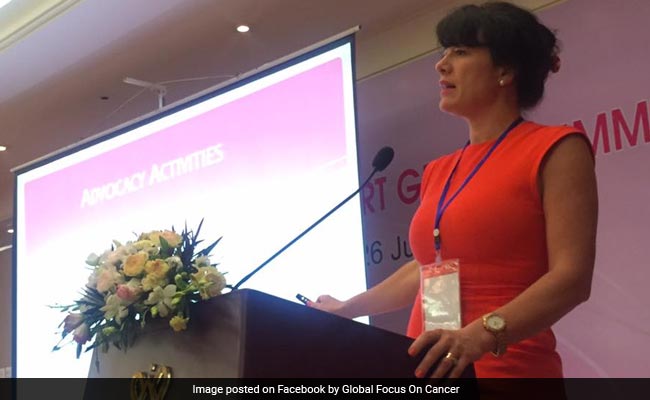 Dvaladze was going to help run a breast cancer program when the incident happened.

A woman says she awoke on an overnight Delta flight to a man squeezing her crotch, and then leaning on top of her as she struggled to get out of her aisle seat.

Allison Dvaladze ran and asked flight attendants for help, she said, but was told that such assaults are quite common, and was later asked to return to her seat.

Nearly two years after she says she watched the man walk off the plane unhindered, Dvaladze sued Delta Air Lines in federal court Tuesday - unsatisfied with the frequent flier miles she says the airline offered for the inconvenience of a sexual assault.

Dvaladze, who lives outside Seattle, was bound for Amsterdam and then East Africa on April 15, 2016. She was going to help run a breast cancer program for developing countries there, the Seattle Times reported.

A few hours into the flight, as the cabin lights dimmed, she drifted off to sleep with headphones in her ears.

She said she awoke to find her seat-mate's hand between her legs.

The man didn't care, she said. He grabbed her again.

Dvaladze knocked his hand away a second time - "No!" - and tried to block him from making a third squeeze. But the man overpowered her, she said. He leaned on her with his body and did what he wanted.

She managed to undo her seat belt and run to the back of the plane to the flight crew. "I couldn't breathe," she told PBS. "I couldn't explain right away what had happened."

When she did get the words out, she said, she couldn't quite fathom the crew's response.

"Let it roll off your back," one attendant told her, the lawsuit claims.

Delta did not immediately reply to questions from The Washington Post after Dvaladze sued the airline and her unnamed alleged assaulter in federal district court.

When the Seattle Times asked the airline about it in December, a Delta spokesman wrote that the company took sexual assault seriously and was "disheartened by the events Ms. Dvaladze's described."

In the lawsuit, Dvaladze claims that crew members told her they'd be more concerned if she were a child, but that in-seat gropings were a regular thing.

And they were not wrong.

The Seattle Times reported that the FBI investigates several dozen assault claims each year, but many more go unreported. The president of the Association of Flight Attendants - who said she had been groped herself - told PBS that a survey found that 20 percent of attendants have been told of an assault on their plane, suggesting that there are thousands of such incidents.

Among them: Late last year, a woman said a drunken man harassed and assaulted her throughout a 45-minute United Airlines flight.

Randi Zuckerberg, a former Facebook executive, alleged a nearly identical incident on an Alaska Airlines flight a few weeks before that.

These reports go back decades; President Donald Trump has denied putting his hand up a woman's skirt during a flight in the 1980s, for example.

Dvaladze said her own seatmate did not even have to explain himself.

The flight crew promised to look into the matter, she said, and found a male passenger willing to switch seats with her so she didn't have to sit next to her attacker while crossing the Atlantic Ocean.

But just before landing in Amsterdam, the lawsuit says, a flight attendant told Dvaladze to return to her original seat. The man who had switched with her wanted his seat back so he could get off the plane faster.

She refused, she said. She still had to vacate her temporary seat, but the flight crew found another passenger willing to switch with her during landing.

When the plane landed, no police were waiting at the jet bridge.

"The man who had assaulted her walked off the plane as if nothing had happened," the Seattle Times wrote.

To this day, Dvaladze said, Delta has not revealed his name.

She emailed the airline from Nairobi to ask what its investigation had turned up, she said, and was eventually told that Delta had no record of an assault.

After several weeks, CNN reported, she got an email from Delta. "I know it's not fair when one person's behavior affects another person," it read, and offered a "goodwill gesture": 10,000 frequent flier miles.

She is seeking unspecified damages for gross negligence leading to injury, medical bills, physical and emotional pain and humiliation.

Promoted
Listen to the latest songs, only on JioSaavn.com
Multiple law enforcement agencies were also trying to investigate the incident, according to the lawsuit, but they don't know the man's name either.

(This story has not been edited by NDTV staff and is auto-generated from a syndicated feed.)
Comments
Allison DvaladzeDelta Airlines Assault