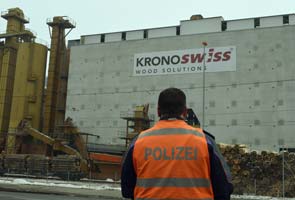 Berlin: Several people were killed on Wednesday in a shooting at a wood-processing company in central Switzerland, police said.

Police in Lucerne canton (state) said in a statement that the shooting occurred shortly after 9 a.m. at the premises of Kronospan, a company in the small town of Menznau, west of Lucerne. They said there were "several dead and several seriously injured people" and that rescue services were deployed and the scene sealed off. They did not elaborate.

The local Neue Luzerner Zeitung newspaper cited a witness as saying that the shooter opened fire in the company canteen. Swiss news website 20min.ch, citing a reporter at the site, said police confirmed three deaths - including the assailant - and said seven people were injured, some of them seriously.

However, police in Lucerne, the local administrative center, said they didn't yet have figures.

Promoted
Listen to the latest songs, only on JioSaavn.com
According to the local town council, Kronospan has some 450 employees.

It was not immediately clear who the shooter was or what the motive might have been.