6-Year-Old Was Separated From Her Deported Father. His Is A Tearful Tale

Arnovis Guidos Portillo remembers the authorities in green uniforms telling him that this would only be temporary. 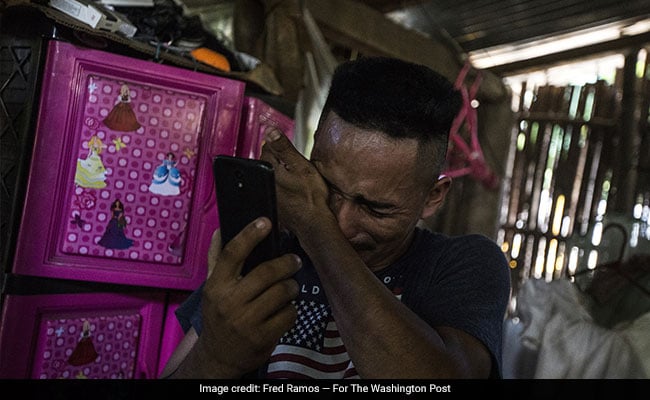 Corral De Mulas: Arnovis Guidos Portillo remembers the authorities in green uniforms telling him that this would only be temporary.

They told him that his 6-year-old daughter, Meybelin, should really go with them, he recalled. The holding cell was cold, he said he was told, and the child was not sleeping well. Don't worry, he was assured, she would take the first bus, and he would follow soon.

"What's best is we take her to another place," he recalled a U.S. official telling him.

It's a conversation this 26-year-old farmer from El Salvador has replayed for nearly a month. His daughter was taken from him on his second day in U.S. immigration custody in Texas, he and his lawyers said, and she remains somewhere in the United States.

Guidos was deported Thursday back to this small Central American nation, where he lives in a one-room, dirt-floor shack with no electricity and two goats in the yard.

He and his daughter are one of more than 2,000 migrant families who have firsthand experience with President Donald Trump's "zero tolerance" immigration policy. The decision to prosecute all those caught crossing illegally into the United States meant that parents and children were sent to separate detention centers and shelters. Although Trump ended family separations in an executive order last week, many parents are still trapped in a bureaucratic nightmare, far from their children and unsure how they will be reunited.

"I would advise anyone who wants to travel to the United States with their children not to do it," he said. "I would never want them to have to walk in my shoes."


And yet, Guidos is ready to travel again, if he cannot find Meybelin soon, even if he must retrace his recent 1,500-mile journey: crossing Mexico crammed in the back of a refrigerated cargo truck after weeks in U.S. detention with frigid rooms and scalding showers and mocking guards.

Details of Guidos' case were confirmed by court documents and his lawyers.

A U.S. Customs and Border Protection spokesman said in a statement that the agency takes all allegations of mistreatment seriously and that its men and women "perform their duties professional professionally and treat everyone equally with dignity and respect."

"Children represent the most vulnerable population and as such every CBP employee carries the fundamental ethical and moral belief as well as a legal obligation to put the welfare of any child first," the statement said.

A spokeswoman for ICE, Sarah Rodriguez, said that Guidos, on June 19, "submitted a written request that he be removed to El Salvador without his child."

Parents in ICE custody "have the opportunity to wait in detention for a coordinated removal with a child or may waive their right to such coordination," she said. 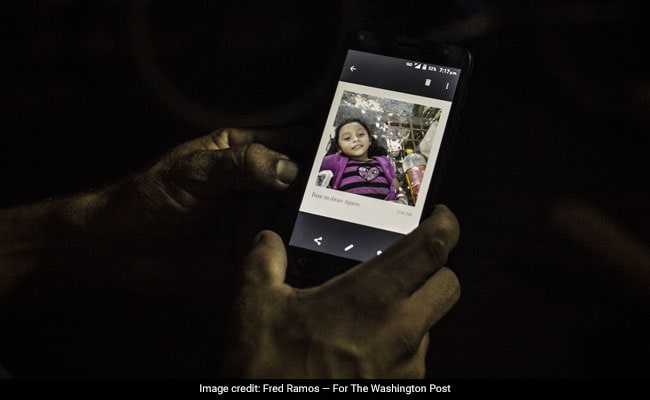 Arnovis Guido holds up a photo of his daughter, Meybelin, who was separated from him in late May after he asked for asylum.

Guidos arrived home Friday evening in the coastal province of Usulutan, far out on a remote peninsula jutting into the Pacific Ocean. He works on a corn farm, earning $7 a day, and helps a local organization hatch baby sea turtles from eggs laid on the beach.

He built his house from scrap wood his brother gave him. It has two mattresses - one for him, one for Meybelin - a hammock, a pink dresser for her clothes. A few minutes after arriving home, he had taken her best white dress out of its plastic bag, a reminder of her, when his cellphone rang and Meybelin's tiny voice, from wherever she was, entered the room.

Guidos was holding back tears from the first moments. He asked her how she was, whether she had eaten. Was she playing or studying or going to church? Despite endless requests over the past month, no one had told him her location or when she might be freed, and she was too young to know.

Had the people there bathed her, he asked? Combed her hair? Given her toys?

And that's when he really began to cry.

Guidos' problems began two years ago on a soccer field cut out of the jungle behind his house, he said. He got into a fight with a player whose brother was a top member of the Barrio 18 gang in Puerto El Triunfo, the town across the bay.

In recent years, gangs seized control of the one paved road running down this rural peninsula. Teenagers manned checkpoints with rifles slung over their shoulders and extorted passersby. It could cost $100 in $5 and $10 payments just to get off the peninsula, he said.

Two years ago, El Salvador had one of the highest murder rates in the world. Gang violence has displaced hundreds of thousands of Salvadorans, many of whom seek refuge in the United States. But Attorney General Jeff Sessions said in a ruling earlier this month that immigration judges generally cannot consider gang violence as grounds for asylum.

After the fight on the soccer field, Guidos went into hiding. Gang members lived within sight of his shack, and they hauled away a brother-in-law at one point and put a pistol in his mouth, he said.

Twice Guidos fled north, hoping for asylum, but was deported once from Mexico and once from Louisiana. By then, he had separated from Meybelin's mother. He decided to take his daughter out of kindergarten and make one more try. His brother lived in Kansas, and he hoped to make it there.

"It's hard to hide here," he said of Corral de Mulas. "Everyone knows you."

On May 26, after nearly a week of travel, Guidos and Meybelin boarded a raft, floated the Rio Grande, and walked into the scrub near Hidalgo, Texas, to turn themselves in to the Border Patrol and ask for asylum. 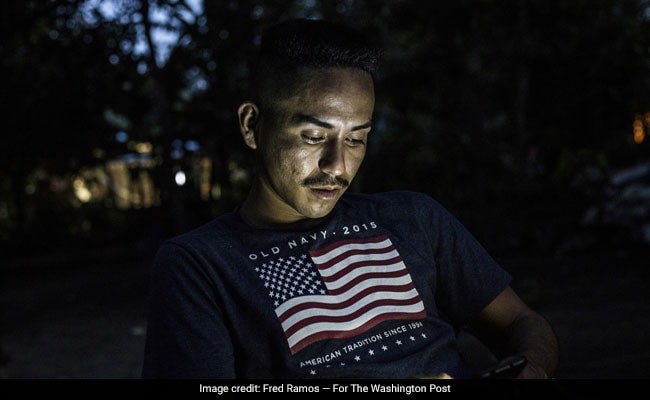 Arnovis Guidos Portillo checks his phone Friday in El Salvador. When he gets a call from his daughter, he's not sure how she knows the right number - or where the call is coming from.

He did not know exactly where they were taken, but normally migrants are processed at CBP facilities before going to court and moving on to a longer-term detention center. On their first day in detention, they were given mylar blankets and ham sandwiches every six hours, he said.

Now, he considers this his best day in detention because Meybelin was still with him.

Once she was taken away, yelling and crying, he could get no answers about where she had gone. On May 29, three days after arriving, he pleaded guilty to crossing the border illegally and was sentenced to time served, according to federal court documents.

Afterward, he begged for information about his daughter. He recalled one U.S. official telling him: "They may have taken her to Florida or New York."

"That's when I really felt hell come down on me," he said.

Guidos was transferred to an ICE detention center outside of Laredo, Tex., after his court appearance, according to paperwork he was given. Authorities there would regularly ask migrants if they wanted to sign papers approving their own deportation, he said. For two weeks, he declined, insisting he would not leave the United States without Meybelin. Eventually, he said, he was told that nothing would change. He lost all hope and signed the document for his removal.

"He told me, 'You're never going to get information about your daughter here,' " Guidos recalled one official saying. "It's better to go back to your country."

Guidos was in tears when he walked out of the deportee processing center in San Salvador on Thursday afternoon, carrying his belongings in a plastic bag.

"Imagine, all of her life she's been with me and now she's not," he said of his daughter. "And I don't even know where she is."

He got into the bed of a pickup truck with his other relatives for the three-hour drive to his village.

The day he arrived in El Salvador, he received his first call from Meybelin since their separation. It's unclear whether she knew her relatives' phone numbers or was given them by shelter staff.

When Meybelin called again the next evening, she used a phone number that is associated with a shelter in Phoenix, run by Southwest Key Programs, a Texas-based nonprofit organization that has received $1.1 billion in federal contracts to house migrant children since 2014.

A Southwest Key Programs spokeswoman said she could not confirm if Meybelin was at the Phoenix shelter and referred queries to the Office of Refugee Resettlement, part of the Department of Health and Human Services. An HHS spokesman said it would take days to confirm her location and, even then, the department might not be able to speak about her case because of privacy concerns. 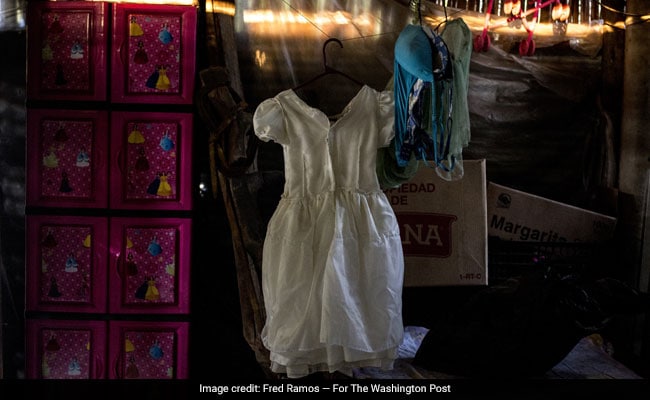 A dress and other items belonging to Meybelin Guidos Portillo, 6, wait at her father's home in the coastal province of Usulutan.

Immigration lawyers working with detained families say that family reunification is an expensive process that can take years due to the difficulty of obtaining information across various government agencies.

"There is no clear path made by the administration to reunite the 2,300 children already taken from their parents," said Jennifer Falcon, communications director at RAICES, an organization that is representing Meybelin through her family. "And every day, it gets more difficult as they continue mass deportation of their parents."

Meybelin has been able to periodically call relatives in the United States and El Salvador, but the family has had trouble getting answers from shelter staff.

"They won't let her pass the phone to anyone," said her grandmother, Sonia de Jesus Portillo. "I've run out of tissues, I've been crying so much. We're desperate."

"What are you doing?"

She told him she wanted her clothes and didn't like the food. She said she had tried to call her mother twice but no one answered.

He promised to take her to the park when she was home.

"Meybelin," he said as the tears ran down his face. "I love you, mi amor."

Promoted
Listen to the latest songs, only on JioSaavn.com
When the call ended, he sat down on his mattress, three countries away from this 6-year-old girl, and cried into his hands.