"You're An Idiot": Australia PM Heckled By Angry Bushfire Victims

The prime minister, who won a surprise election victory last May, ended 2019 on a sour note with fires raging across five states while he took off on a family holiday to Hawaii. 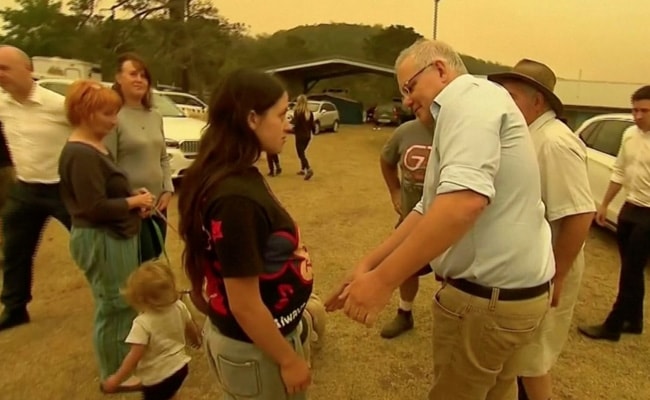 Australian Prime Minister Scott Morrison faced enraged hecklers and an angry firefighter in a town ravaged by bushfires, piling pressure on the leader amid an unprecedented crisis that has killed at least 18 people.

A firefighter refused to shake Morrison's hand when he visited the town of Cobargo in New South Wales state on Thursday.

Video footage showed Mr Morrison tried to grab the man's hand, who then got up and walked away, sparking an apology from the prime minister.

A local fire official explained that the man had lost his house while defending others' homes.

"You won't be getting any votes down here, buddy. You're an idiot," the man shouted.

"I don't see Kirribilli burning after the fireworks," he screamed.

"I just see it as a sense of frustration and hurt and loss and anger that is out there about what is the ferocity of these natural disasters," he told reporters in Bairnsdale in eastern Victoria state.

"And I understand that, and we will seek to provide that comfort and support in whatever way we can," he said.

Mr Morrison had walked away from a Cobargo woman who urged him to provide more funding to the town and state firefighters.

"This is not fair. We're totally forgotten about down here. Every single time this area has a flood or a fire, we get nothing," another woman shouted as Morrison drove away.

Even a state politician from his own Liberal party whose seat is in the region took a swipe at the prime minister.

The prime minister, who won a surprise election victory last May, ended 2019 on a sour note with fires raging across five states while he took off on a family holiday to Hawaii. Facing criticism, he cut the holiday short and apologised for making a mistake.

He is now considering cancelling an official trip to India scheduled for January 13 to 16, due to the fire emergency.

"I'm inclined not to proceed on that visit," Morrison said on Friday.

Australia's coal and gas exports, blamed for adding to global climate change and the conditions stoking bushfires, were expected to be high on the agenda for talks in India. Mr Morrison's government has long supported a controversial coal mine planned by the Adani Group in Australia.

(Except for the headline, this story has not been edited by NDTV staff and is published from a syndicated feed.)
Comments
australia bushfire 2019Australian PM Scott Morrison