Selfie-Taking Tourist Loses Phone On Top Of Mount Vesuvius, Falls Into Crater While Retrieving It

When the man and his family reached the top of the 4,000-foot-high volcano, they decided to celebrate the occasion by clicking a selfie. 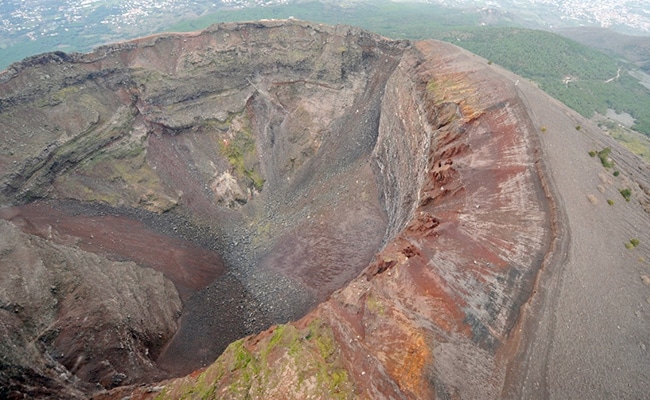 A photo of the crater of Mount Vesuvius in Naples, Italy. (AFP File)

An American tourist survived a fall into the crater of Mount Vesuvius, Italy's famed volcano, as he scrambled to retrieve his phone, The Washington Post said in a report. The incident took place on Saturday, when 23-year-old was hiking on the volcano with his family, the outlet further said. The family had taken a forbidden trail, Naples Police told local media.

The man has been identified by NBC News as Philip Carroll.

The Post said when the man and his family reached the top of the 4,000-foot-high volcano, they decided to celebrate the occasion by clicking a selfie. While clicking the selfie, the phone slipped out of his hand and fell into a crater.

He then descended into the crater in an attempt to get his phone back, but fell several metres after losing balance, The Guardian said in its report.

Local guides, after spotting Mr Carroll falling into the crater, rushed to the scene. They climbed down the steep cliff to pull the man out. The police, which also arrived at the scene, deployed a helicopter to help in the rescue operation.

"This morning a tourist for reasons still to be determined ... together with his family they ventured on a forbidden path, arrived on the edge of the crater and fell into the mouth of #Vesuvius," Gennaro Lametta, a government tourism official, said on Facebook, according to Google translation of the post in Italian.

Mr Carroll sustained minor injuries on his arms and back.

The tourist and his family members have been charged by the local police for invasion of public land, The Guardian said in its report. The group, which reportedly ventured to the volcano without any tickets, took a path that was clearly signposted as being forbidden due to being extremely dangerous, it added.