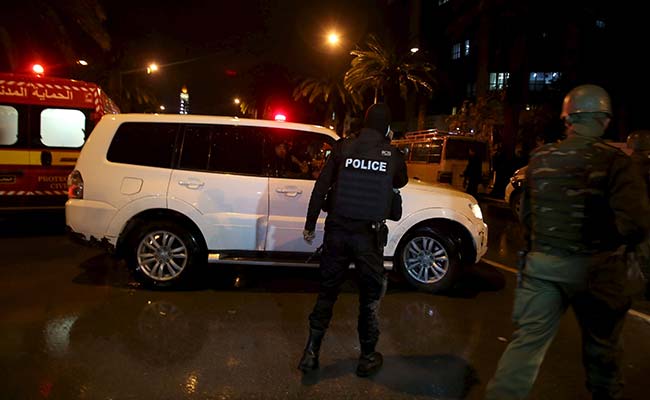 A Tunisian police officer is pictured after an attack on a military bus in Tunis, Tunisia on November 24, 2015. (Reuters)

TUNIS: At least 13 people were killed in Tuesday's apparent suicide bombing of a Tunisian presidential guard bus in central Tunis, prompting the government to declare a state of emergency and tighten security around the capital.

Troops and armed police patrolled the city streets and set up checkpoints searching vehicles and pedestrians. At Tunis international airport security forces were allowing in only passengers travelling.

Tuesday's blast on a main boulevard was the third major attack on Tunisia this year following the gun assaults on a Sousse resort hotel in June and the Bardo Museum in Tunis in March, both claimed by Islamic State. Officials had earlier put the death toll at 12.

"This is a new type of attack that targets the prestige of the state, such as the symbol of the presidential guard," said presidential security official Hichem Gharbi. "We are facing a real challenge with an attack right in the city centre."

No group immediately claimed responsibility for Tuesday's attack. Officials said it was not immediately clear what kind of explosive had been used to rip through the bus as guards were boarding to be driven to the presidential palace for duty.

But one presidential source said on Tuesday it was likely a bomber detonated his explosive belt inside the vehicle.

President Beji Caid Essebsi was due to hold a national security meeting on Wednesday. On Tuesday he declared a month-long state of emergency giving the executive and the security forces temporarily more authority.

Tunisia has been praised for its democratic progress since its 2011 uprising ousted autocrat Zine Abidine Ben Ali.

But fighting Islamist militants has become a major challenge for a country heavily reliant on tourism for its revenues. More than 3,000 Tunisians have left to fight for militant groups in Iraq, Syria and neighbouring Libya.
© Thomson Reuters 2015