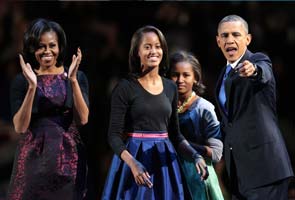 Washington: US President Barack Obama on Wednesday joked with his two daughters, Sasha and Malia, that one dog was enough for them, even as he acknowledged their contribution and support in his successful re-election bid.

"And I'm so proud of you guys. But I will say that for now one dog's probably enough," Mr Obama said amidst laughter.

After his victory in the last election, Mr Obama had promised a dog for his daughters; which is Bo, now known as the 'First Dog' of the United States.

"Let me say this publicly: Michelle, I have never loved you more. I have never been prouder to watch the rest of America fall in love with you, too, as our nation's First Lady," he said, in his victory speech.

"Sasha and Malia, before our very eyes you're growing up to become two strong, smart, beautiful young women, just like your mom," Mr Obama said, as the First Lady and his daughters joined him on the stage.