Authorities fear 5,000 more could be buried beneath the ruined city, where entire villages were swallowed. 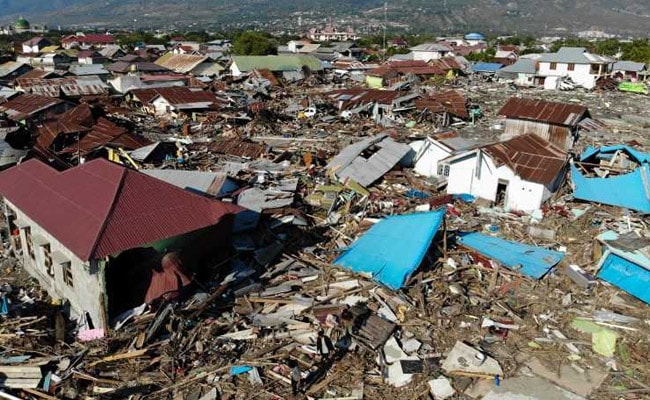 A 7.5-magnitude quake and tsunami struck off the Indonesian island of Sulawesi last month. (File)

The search for those killed in Indonesia's quake-tsunami disaster was called off Thursday, despite there being around 5,000 people still missing.

The magnitude 7.5-quake and a subsequent tsunami razed whole swathes of Palu to the ground on September 28.

More than 2,000 bodies have been recovered since the twin disaster on Sulawesi island.

But authorities fear 5,000 more could be buried beneath the ruined city, where entire villages were swallowed.

Rescuers had struggled to find remains in the twisted wreckage, a job made worse as mud hardened and bodies decomposed in the tropical heat.

"The search and rescue (SAR) operation for the victims will end this Thursday afternoon," SAR field director in Palu, Bambang Suryo, told AFP.

The government earlier indicated these hard-hit areas would be left untouched as mass graves.

Parks and monuments are planned at three of these worst-hit areas -- Balaroa, Petobo and Jono Oge -- to commemorate the possibly thousands of dead who will never found.

Those zones were all but destroyed by liquefaction, a phenomenon where the brute force of a quake turns soil to quicksand.

Humanitarian assistance has poured into the disaster-ravaged city but the recovery ever been criticised as moving too slowly.

Some foreign rescue teams were prevented from deploying quickly to the ground to assist in the search for the dead and missing.

The UN says 200,000 people are in dire need of humanitarian assistance in Palu, with clean drinking water and medical supplies still in short supply.

An estimated 80,000 people were displaced by the disaster, many squatting in tents outside their destroyed homes.