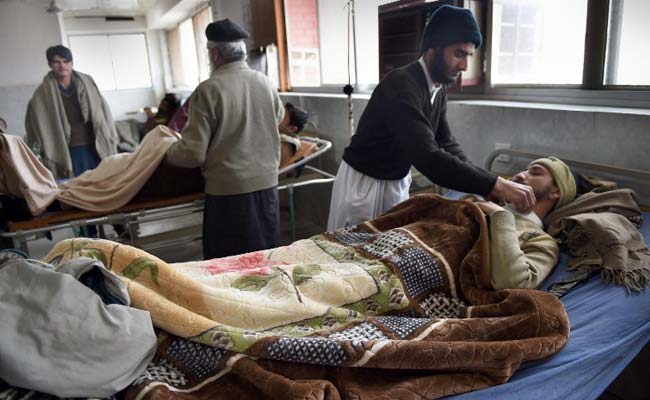 Pakistani relatives tend to an earthquake survivor as he is treated at a hospital in Peshawar today. (AFP Photo)

The tremor hit at a depth of 203.5 kilometres (126 miles), the US Geological Survey said, sending people fleeing shaking buildings into a bitterly cold night and prompting fears of aftershocks.

The epicentre of the quake, which was felt as far away as New Delhi, was in the remote Afghan province of Badakhshan, close to the Pakistani and Tajik borders.

Though there were no major reports of damage, at least 30 people were reported injured in the north-western Pakistani city of Peshawar and 12 others in the nearby Afghan province of Nangarhar.

There was no immediate information from Badakhshan where communication with remote, mountainous villages is typically slow.

USGS had initially reported the quake's magnitude at 6.2.

In October, a 7.5-magnitude quake in the same region ripped across Pakistan and Afghanistan, killing nearly 400 people and flattening buildings in rugged terrain.

For many in Pakistan, October's quake brought back traumatic memories of a 7.6-magnitude quake that struck in October 2005, killing more than 75,000 people and displacing some 3.5 million.

Afghanistan is frequently hit by earthquakes, especially in the Hindu Kush mountain range, which lies near the junction of the Eurasian and Indian tectonic plates.

In Nepal a quake in April and a strong aftershock in May killed more than 8,900 people.