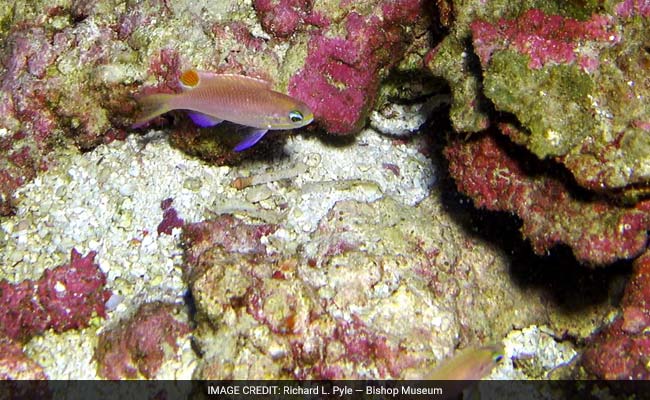 Tosanoides obama, the fish have just been named in honor of the 44th president.

Honolulu: While scuba diving among the Pacific's deep-sea corals in June, marine biologist Richard Pyle spied a tiny fish the size of a toy race car. Googly-eyed and blush pink, the creature wore a prominent splotch of bluish red on the rear of its dorsal fin.

To Pyle's expert eye, it was a peculiar marking, something the researcher at Hawaii's Bishop Museum had never seen. Intrigued, he collected the fish for careful examination at the water's surface, where he also consulted with colleagues aboard a National Oceanic and Atmospheric Administration research vessel.

"It was one of those eureka moments," he said this week. And he and everyone else was convinced: The creature just snatched from the far, rarely explored depths of Papahanaumokuakea Marine National Monument was indeed a new species.

But what to call it? Pyle decided the distinguished red fleck that had initially attracted his attention looked like the logo of Barack Obama's 2008 presidential campaign - although, he acknowledged, "it takes a lot of imagination to see that resemblance."


Obama's home state has not named anything in his honor during his presidency. That changes Wednesday when Pyle and two colleagues officially dub the newest member of the basslet family Tosanoides obama.

Pyle, NOAA scientist Randall Kosaki and Association for Marine Exploration founding member Brian Greene found the species during a dive off Kure Atoll, the northernmost Hawaiian island, 1,200 miles northwest of Honolulu. Part of their motivation for its name was to persuade the president to expand the marine monument, which President George W. Bush created a decade ago.

In late August, Obama quadrupled Papahanaumokuakea's size to 582,578 square miles, making it the largest protected area on the planet. Commercial fishing and other extractive activities are banned throughout the monument.

The researchers did not seek the 44th president's permission in advance of submitting the name to the International Commission on Zoological Nomenclature for approval, and there are four other species already been named after him. Those include a trapdoor spider, a speckled freshwater darter, a parasitic worm and an extinct lizard.

The entomologists emphasized that they meant it as a sign of respect for the GOP leaders, and Pyle said the same sentiment applied to Obama's fish. He and his colleagues timed the announcement to coincide with Obama's last vacation on Oahu as president.

"It's definitely an honor, not an insult, on our side," Pyle said.

Tosanoides obama's connection to Obama's legacy is quite solid: It is the only fish known to live exclusively within the Papahanaumokuakea's confines.

Since June, scientists have located just five of them living along the limestone ledges of ancient shorelines. Scientists say there is reason to believe that the fish's primary population exists below the 300-foot depths safely explorable by divers, which could be part of the reason researchers are only now beginning to encounter them.

Though their petite size makes them a perfect snack for larger fish that roam Papahanaumokuakea's depths, these plankton-eaters swim in silence, which helps protect them from predators.

"It's a tough place to be a small fish," Pyle said. "Big fish will eat these guys like popcorn."

Many scientists had pushed for the monument's expansion because it would offer additional protection for species there that are at risk from climate change, fishing and other threats. Without additional restrictions, they warned, seabed mining could take place and damage the region's vibrant coral reefs.

The Northwestern Hawaiian Islands - which have received federal safeguards from seven presidents since 1909 - are the planet's largest seabird gathering site, with more than 14 million birds from 22 species. They also are home to nearly all Laysan albatrosses and endangered Hawaiian monk seals, along with a wide array of shark species and the world's oldest living animal, a black coral estimated to be 4,500 years old.

Kosaki noted that because the newly discovered fish inhabits the outer edge of an extensive string of atolls and islands, a severe coral-bleaching event would mean "there's no next place or next plan" for repopulating the species.

Hawaii's aquatic diversity has been meticulously studied for well over a century, which makes the discovery of any new species in its waters highly unusual. But that is changing as researchers use advanced scuba gear to dive far deeper.

NOAA has conducted six research expeditions to Papahanaumokuakea. Kosaki said the teams brought back 75 species of algae that are probably new to science. They are just beginning to catalogue them.

Promoted
Listen to the latest songs, only on JioSaavn.com
"It's kind of like the new frontier," he said. "You're diving on reefs that no human has ever laid eyes on."