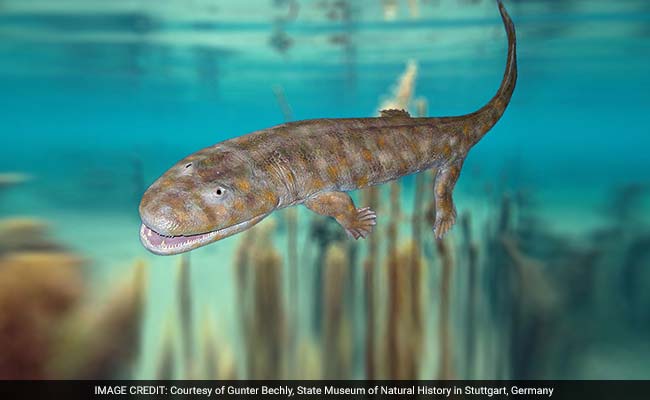 A model reconstruction of Acanthostega.

The fossils were found in a tangle in the 365-million-year-old Greenland rock: 20 sets of floppy limbs and fish tails thrown together by an ancient catastrophe. Paleontologists said the creatures, called Acanthostegas, were swept out of their underwater homes by a flood, then perished in a subsequent drought - though they had legs, the animals hadn't yet evolved the ability to walk on land.

More tragic still, every specimen in the "mass death deposit" was a juvenile. So where were their parents?

The answer could "rewrite the conquest of land," said Sophie Sanchez, a paleontologist at the University of Uppsala in Sweden and the lead author of a study on the Acanthostegas published Wednesday in the journal Nature.

Acanthostegas are one of the iconic transitional forms between the first land vertebrates and their fishy ancestors. When the Greenland fossils were discovered almost 30 years ago, scientists assumed they belonged to adult, aquatic creatures.

They didn't have the right adaptations for terrestrial life: The digits of their feet were webbed, their joints were ill-suited to carrying their weight, and they had a well-developed gill skeleton instead of lungs. Though they are tetrapods - the class of four-limbed animals that gave rise to the land vertebrates, and eventually to all amphibians, reptiles and mammals, including us - they couldn't be the tetrapod that first stepped out of the water onto land. That creature probably came along later.

That the Greenland fossils were actually juveniles changes the equation, Sanchez said. Most modern amphibians live in the water during development but on land as adults - "amphibia" literally means "both kinds of life." So while Acanthostega youths clearly lived underwater, their parents "were certainly living in another environment," Sanchez said. "Maybe they were terrestrial, maybe they were aquatic."

Either way, the find suggests that early tetrapods had already evolved the duality of modern amphibians, with distinct juvenile and adult phases. That's important, Sanchez said, because understanding how these ancient creatures grew can also help us figure out how they evolved.

The Acanthostega fossils were discovered almost 30 years ago by paleontologist Jennifer Clack, a co-author on the Nature study. The animals were about two feet long, with flat, paddle-shaped heads and salamander-like limbs. They seemed to be an intermediate form between the lobe-finned fishes like Tiktaalik (the grizzled great-grandfather of all land vertebrates) and the first terrestrial animals, such as Ichthyostega.

But it was difficult to get inside the bones to take a closer look. Fossilized bones have been subject to mineralization - the organic material is literally replaced with rock - which makes them impermeable to most X-rays. And paleontology curators are generally reluctant to let scientists take their specimens and hack them open.

"If I had asked these curators to section these bones, they would have said, 'You're crazy. No way,'" Sanchez said.

So she took them to the European Synchrotron - a particle accelerator in Grenoble, France that produces one of the most powerful X-rays on Earth. There, scientists were able to image the interiors of several upper arm bones from the Greenland site.

Inside each one was a pattern of concentric circles, like the rings in the trunk of a tree. These are common in all animal bones - as the animal grows, new tissue is laid down in predictable layers. The rings get narrower as the animal ages.

But the pattern in the Acanthostega fossils didn't get narrower, indicating that these specimens weren't adults yet. In addition, their limbs were made mostly of cartilage, rather than hardened bone.

According to Nadia Fröbisch, an evolutionary biologist at the Museum für Naturkunde (Natural History Museum) in Berlin, this research supports the hypothesis that the Acanthostegas were basically aquatic. But it also provides "a deeper understanding of the development and evolution of our four-legged forerunners," she wrote.

"Although many advances have been made in understanding the evolutionary transition from fish to tetrapod, a key piece of the puzzle has remained elusive - how did the earliest tetrapods grow? The process by which an organism develops from the fertilized egg to the adult form ... reveals details about the evolution and biology of a species that cannot be made by studying adult individuals alone."

(This story has not been edited by NDTV staff and is auto-generated from a syndicated feed.)
Comments
Greenland RockAcanthostegasEvolutionary TransitionEvolutionIchthyostega