Sandy's winds of uncertainty blow through US presidential race 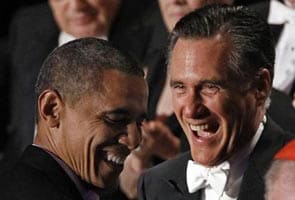 Washington: The devastating storm that slammed into the U.S. East Coast last week could send winds of uncertainty through Tuesday's presidential election, narrowing an already close contest and casting doubt on the legitimacy of the outcome.

Though superstorm Sandy is unlikely to determine whether President Barack Obama or Republican Mitt Romney wins the White House, experts said it could expose flaws in how the United States conducts elections, leading to protracted legal wrangling and lingering bitterness in a country already fractured along partisan lines.

In a worst-case scenario, the storm disruption could cause Obama to lose the popular vote and still win re-election, stirring up vitriolic memories of the contested 2000 battle that allowed Republican George W. Bush to triumph over Democrat Al Gore.

At minimum, low turnout would add another wild card to an election projected to be among the closest in U.S. history. Voting could be an afterthought for hundreds of thousands of people still struggling with power outages, fuel shortages and plummeting temperatures.

"It's a possibility that we'll see significant drops in turnout in some of these densely populated areas," said George Mason University professor Michael MacDonald, a voter turnout expert.

"The effects could be quite dramatic in terms of the popular vote," he said.

Tuesday's election presents yet another headache for local officials in New York and New Jersey, which were hardest hit by the storm. Rescue workers are still recovering bodies, 1.9 million homes and businesses have no power, and tens of thousands of people are without heat as temperatures dip near freezing.

Sandy, one of the most damaging storms to hit the United States, hammered the region with 80-mile-per-hour (129-kph) winds, while walls of water overran seaside communities. At least 113 people in the United States and Canada died.

In New Jersey, where 25 per cent of homes and businesses have no power, officials are allowing displaced voters to cast their ballots by email. In battered Monmouth County, officials are spreading the word about new polling locations in at least 29 towns and setting aside paper ballots to use if electronic voting machines fail.

Legal experts said the late changes, however well-intentioned, may give the losing candidate a basis to challenge results.

"The devil is in the details and no doubt these new rules will be fertile ground for those who choose to challenge the results in the election." said Angelo Genova, a New Jersey election law expert who represents Democratic candidates in this election.

The post-Sandy chaos also could expose flaws in the arcane electoral college system the United States uses to elect presidents.

Candidates are not required to win the popular vote nationwide, but they must amass a majority of the 538 "electoral votes" that are awarded to each state based on population. The system was set up when the United States was founded, as a compromise between slave states and free states.

This year, Obama is expected to handily win New York, New Jersey and Connecticut, the states most impacted by the storm. But his popular vote total could fall by hundreds of thousands if large numbers of storm-hit voters in Democratic areas are unable to participate.

Conceivably, Obama could win the White House while losing the popular vote.

"You'll see lower turnout, yes, but it's not going to change the outcome of the election," said Hunter College political-science professor Jamie Chandler, who predicts Obama will win by at least 1 million votes.

If Obama carries the popular vote by a narrow margin, it could have implications on his ability to govern effectively, according to Ruy Teixeira, a senior fellow at the liberal Center for American Progress.

"The more Obama has a solid popular margin the better his victory," he said.

On Sunday, several Republicans said the storm gave Obama an advantage in the campaign's final week by shifting public attention away from the sluggish economy and other topics they hoped to emphasize.

Obama campaign officials said that they are confident the storm will not interfere with the voting process. But they intend to have legal experts on standby just in case.

"We're going to have lawyers who are ready to make sure people can exercise their right to vote. We're going to protect that as fiercely as we can," Obama senior adviser David Plouffe said on Friday.
© Thomson Reuters 2012
Comments
US Presidential elections