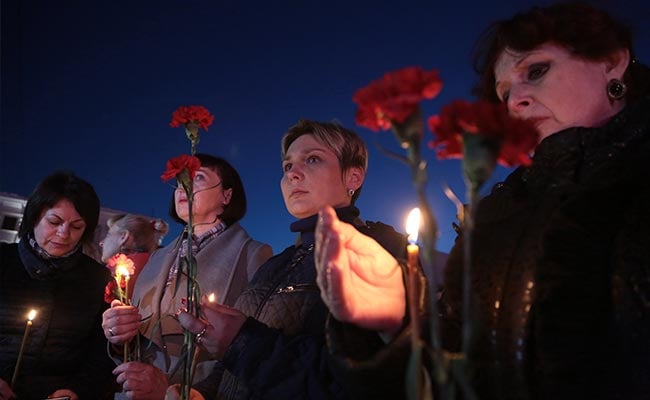 St Petersburg: Russia's second city Saint Petersburg was in mourning Tuesday after an explosion in the metro system killed 11 people and injured dozens, as Kyrgyzstan said a suicide bomber from the Central Asian nation was responsible.

Russian flags flew at half-mast as the city observed the first of three days of mourning.

Heightened security measures were imposed in the metro system, which has reopened, but the attack still weighed heavy on commuters.

"Everyone in the metro can only think of this," said 45-year-old Svetlana Golubeva as she entered the Saint Petersburg underground.

Investigators have launched a probe into an "act of terror" but stressed they would look into other possible causes of the blast, which hit a busy central metro line on Monday afternoon.

Russian authorities have not commented on the alleged bomber's identity.

There was no immediate claim of responsibility for the explosion, which comes after the Islamic State group called for attacks on Russia in retribution for its military intervention in Syria against the jihadists.

Pictures screened on national television showed the door of a train carriage blown out, as bloodied bodies lay strewn on a station platform.

The blast occurred in the tunnel between two key hubs in the system.

President Vladimir Putin on Monday offered condolences as he was holding meetings outside Saint Petersburg and later placed a bouquet of red flowers at the entrance to one of the stations, Technological Institute, where people have improvised a memorial.

The death toll from the blast stood at 11, with 45 injured, according to anti-terror authorities.

"I will be afraid to take the metro now," said Maria Ilyina, 30, standing near the station. "Before we thought that this would not come to Saint Petersburg -- now our city is under threat."

The NAK committee later confirmed security services had found another explosive device at the Vosstaniya Square metro station. This device did not explode and was immediately "neutralised."

Authorities on Monday said the Moscow metro as well as transportation hubs and crowded spots around the country were stepping up security.

German Chancellor Angela Merkel condemned the explosion as a "barbaric act," while US President Donald Trump spoke with Putin.

"President Trump offered the full support of the United States Government in responding to the attack and bringing those responsible to justice," the White House said in a statement about the phone call.

"Both President Trump and President Putin agreed that terrorism must be decisively and quickly defeated."

EU foreign policy chief Federica Mogherini wrote on Twitter that she was following developments "together with all EU foreign ministers" gathered for a meeting in Luxembourg.

"Our thoughts are with all the people of Russia," she wrote.

Russia has not been hit by an apparent attack this deadly since the bombing of a plane carrying holidaymakers back to Saint Petersburg from the Egyptian resort of Sharm el-Sheikh in October 2015, which was claimed by IS. All 224 people onboard were killed.

Russian ground transport has also been hit by extremists before.

Promoted
Listen to the latest songs, only on JioSaavn.com
In 2013, twin suicide strikes within two days at the main railway station and a trolleybus in the southern city of Volgograd -- formerly known as Stalingrad -- claimed 34 lives and raised alarm over security at the Sochi Winter Olympic Games.

A suicide raid on Moscow's Domodedovo airport claimed by Islamic insurgents from the North Caucasus killed 37 people in January 2011.