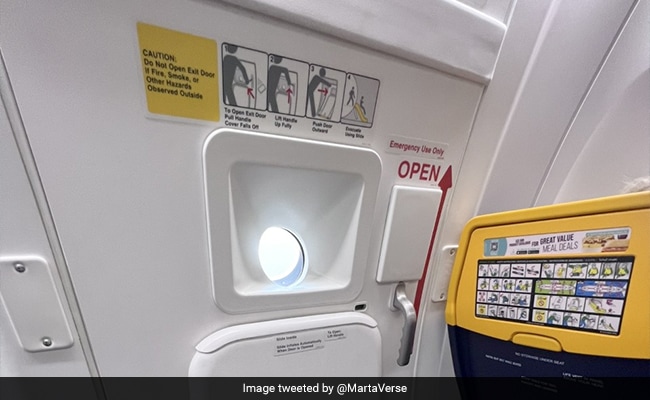 Ryanair's cheeky response to a passenger has disappointed internet

When flying, most people try to pick the best seats for themselves before boarding the plane. While most opt for the aisle seats, many prefer window seat to enjoy the clouds and picturesque views from thousands of feet up in the air. A woman travelling from Ryanair in Europe shelled out extra money for what she thought would be a window seat. But unfortunately, her seat didn't have any windows.

The infuriated passenger tweeted a picture of the seat she got on the flight. The passenger, Martaverse, along with the picture wrote, “Seriously @Ryanair I paid for the window seat.”

Seriously @Ryanair I paid for the window seat 🫠 pic.twitter.com/78qp9W3lLM

On this, the airline responded to the passenger with the same picture but encircled the small circular glass opening they had on their emergency door, justifying that they did offer a window seat to the passenger. Their response has left the internet disappointed. Many Twitter users said that the airline is trying to cover up their poor customer experience by making a joke.

A user wrote, “Imagine thinking this was funny. They've taken someone's money and mugged them off then think they can try to make this socially acceptable by getting people to think it's funny on Twitter.” Another user wrote, “This whole ‘ignoring customer complaints under the guise of social media banter' is getting tiring.”  “The customer is always right” mentality barely exists anymore and it's my favourite thing,” third commented.

Many users were disappointed that the airlines did not pay heed to customers' legitimate complaint. A Twitter user wrote, “So unprofessional to publicly belittle a customer for their complaint for Twitter likes. The issue is obvious and legitimate. I really miss when companies behaved like adults even if the flights are cheap.”