Russia-Ukraine War: Up to 30,000 men, women and children joined an anti-war demonstration in central Berlin on Sunday, with many waving Ukrainian flags or holding banners with slogans opposing the Russian invasion. 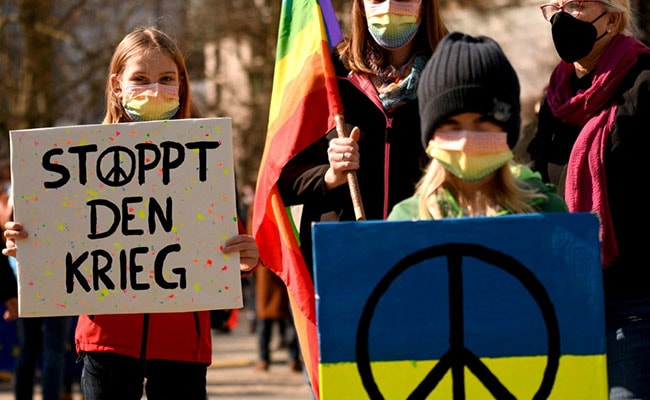 Up to 30,000 men, women and children joined an anti-war demonstration in central Berlin on Sunday, with many waving Ukrainian flags or holding banners with slogans opposing the Russian invasion.

Gathering near the Brandenburg Gate, symbol of a divided Germany during the Cold War, protesters - including people in wheelchairs and toddlers in pushchairs - walked through the streets of Berlin, at times chanting and singing.

"Above all, it's extremely important for Ukrainians to see that we will not forget them, not in two weeks and not after that," said protester Helene Krass.

"If we take to the streets every other Sunday for a year that's okay too,” she said.

Some demonstrators even backed deliveries of weapons to Ukraine. The Russian invasion has prompted Germany to break a post-World War Two taboo of not supplying arms to conflict zones and is now sending Ukraine anti-tank weapons and Stinger surface-to-air missiles from its military stocks.

"Sanctions can be introduced which hit the economy and that's important but we should also consider what's of help to the Ukrainian army in times of war and sadly, it's weapons," said another protester.

Police said between 20,000 and 30,000 people joined the demonstration, less than half the 100,000 who took to the streets two weeks ago, according to police.

It follows a demonstration in the Tuscan city of Florence on Saturday where thousands gathered to show their support for Ukraine.

Russia calls its actions in Ukraine a "special operation" that it says is not designed to occupy territory but to destroy its neighbour's military capabilities and "de-Nazify" the country.