Despite Threat Of War, Life Resumes In Frontline Ukraine City

Shops have been gradually reopening and residents have returned to the city in Ukraine's eastern Donbas region. 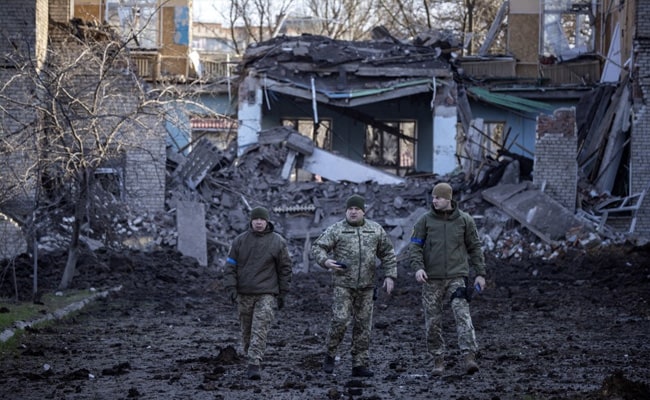 Kramatorsk is a large city at the heart of what remains of Ukrainian-controlled Donbas.

Viktoria Miroshnichenko has just reopened her toy store in Kramatorsk, a city near the frontline in eastern Ukraine, despite the daily sound of bombing roaring in the distance.

"It's a bit scary but we're getting used to it," she said from behind the counter of a shop selling soft toys, bicycles and scooters for children.

The shopkeeper said she was out of work for almost three months without receiving any substantial state support.

Her business, like many others in Kramatorsk, closed after the start of Russia's invasion on February 24.

But in the past few weeks, shops have been gradually reopening and residents have returned to the city in Ukraine's eastern Donbas region.

"In my street, where there are about 300 homes, the residents had almost all left. Now they have almost all come back," Miroshnichenko said.

Kramatorsk, a large city at the heart of what remains of Ukrainian-controlled Donbas, is stirring back to life even as Russian artillery pounds nearby Sloviansk, Siversk and Bakhmut.

But according to Oleg Malimonienko, who has just reopened his restaurant, people have no choice but to return home.

"In 99 percent of the cases, it's because they need to eat well, pay the rent and the bills," said the 54-year-old.

Malimonienko hopes customers -- including some of the Ukrainian soldiers roaming the city -- will flock to his restaurant.

For Natalia Kirichenko, soldiers have been a priceless source of income. The shop assistant said servicemen were regular customers and bought the most items, especially knives and daggers.

"Like us, many people have returned to Kramatorsk, but they don't have any money," the 56-year-old added, saying she had no choice but to resume work.

Although she received state aid while the shop was shut for three months, she said it was far from enough to make ends meet.

'We feel the threat'

"When we hear pretty powerful bombardment coming from one side or the other, we feel the threat and wonder what awaits us," said a resigned Kirichenko.

Miroshnichenko said that the hardest thing about getting to work without a car was the unpredictable nature of using public transport in wartime.

"The tram stops every time the bomb sirens go off," she said. The alarms sound several times per day and Miroshnichenko has had to brave a 50-minute walk to her shop since it reopened for business.

The struggle to get around Kramatorsk has prompted Vladimir Pozolotin's bicycle centre to resume service, the shop employee said, speaking from the basement of a building.

"Many have asked me on my YouTube channel when we were going to reopen because some are scared of taking the car. Others have no petrol or don't want to join long queues at service stations," he explained.

"So they buy a bicycle or come to get theirs repaired," said the 33-year-old, who pedals four kilometres (2.5 miles) every day to commute between his home and work.

Customer numbers are only 10 percent of what they were before the war, but "it's better than nothing," the young man said with a smile.

Pozolotin has remained in Kramatorsk throughout the war and said he has grown accustomed to the distant rumble of shelling that is sparing the city for now.

As for the prospect of the city being seriously imperilled, he was unequivocal in his commitment to Kramatorsk.