Russia-Ukraine War: In Sievierodonetsk, the small city that has become the focus of Russia's advance in eastern Ukraine and one of the bloodiest flashpoints in a war well into its fourth month, further heavy fighting was reported. 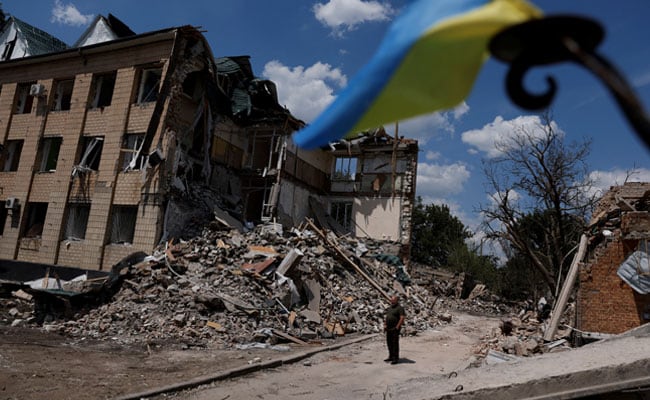 Mariupol Mayor said that sanitation systems were broken and corpses were rotting in the streets.

Ukraine pleaded to Western countries for faster deliveries of weapons as better-armed Russian forces pounded the east of the country, and for humanitarian support to combat growing outbreaks of deadly diseases.

In Sievierodonetsk, the small city that has become the focus of Russia's advance in eastern Ukraine and one of the bloodiest flashpoints in a war well into its fourth month, further heavy fighting was reported.

The war in the east, where Russia is focusing its attention, is now primarily an artillery battle in which Kyiv is severely outgunned, Ukrainian officials say. That means the tide of events could be turned only if Washington and others fulfil promises to send more and better weaponry, including rocket systems.

Germany, among the largest suppliers of weapons since Russia invaded but criticised for being slow to supply the heavy weaponry Kyiv says it needs, plans to revise its rules on arms exports to make it easier to arm democracies like Ukraine, Der Spiegel reported on Friday.

To the south, the mayor of Mariupol - reduced to ruins by a Russian siege - said sanitation systems were broken and corpses were rotting in the streets.

"There is an outbreak of dysentery and cholera," Vadym Boichenko told national television. "The war which took over 20,000 residents ... unfortunately, with these infection outbreaks, will claim thousands more Mariupolites," he said, adding some wells had been contaminated by corpses.

Boichenko called on the United Nations and the International Committee of the Red Cross to establish a humanitarian corridor to allow remaining residents to leave the city, which is now under Russian control.

In a snapshot of the war's wider impact, the UN food agency said reduced exports of wheat and other food commodities from Ukraine and Russia could inflict chronic hunger on up to 19 million more people globally over the next year.

Russia is hoping to capture all of the eastern province of Luhansk, which it demands Ukraine cede to separatists along with neighbouring Donetsk. The two provinces make up the Donbas region, where Moscow has backed a revolt by separatist proxies since 2014.

To that end, the Kremlin has concentrated its forces into a battle for Sievierodonetsk, which is in Luhansk.

Ukrainian troops have largely pulled out of the city's residential areas but have not yielded their foothold on the east bank of the Siverskiy Donets River. Russian forces are also pushing from the north and south to try to encircle the Ukrainians, but have made limited progress.

President Volodymyr Zelenskiy said Russia was trying to "break every town in the Donbas."

"Sievierodonetsk, Lysychansk, Bakhmut, Sloviansk, many, many others," he said in his nightly address. "All these ruins were once happy towns."

Both sides say they have inflicted mass casualties. Reuters could not immediately verify battlefield reports.

Zelenskiy adviser Oleksiy Arestovych estimated the Russian army is losing on average five to six times as many fighters as the Ukrainian side.

Asked in a social media interview whether that suggested the Ukrainian army had lost up to 10,000 fighters in the first 100 days of the war, Arestovych said, "Yes, something like that."

Russian President Vladimir Putin launched what he terms his "special military operation" in Ukraine in February, saying his aim was to disarm and "de-nazify" Russia's neighbour. Kyiv and its allies call it an unprovoked war of aggression to capture territory.

US Defense Secretary Lloyd Austin on Saturday reinforced Washington's commitment to the region in light of Russia's actions.

"Russia's invasion of Ukraine is what happens when oppressors trample the rules that protect us all," Austin told an Asian security forum in Singapore. "It's a preview of a possible world of chaos and turmoil that none of us would want to live in."

Zelenskiy is expected to give a virtual address to the conference later in the day from 0800 GMT.