Russia Should Face 'Severe Consequences' If It's Behind Hack: Mike Pence 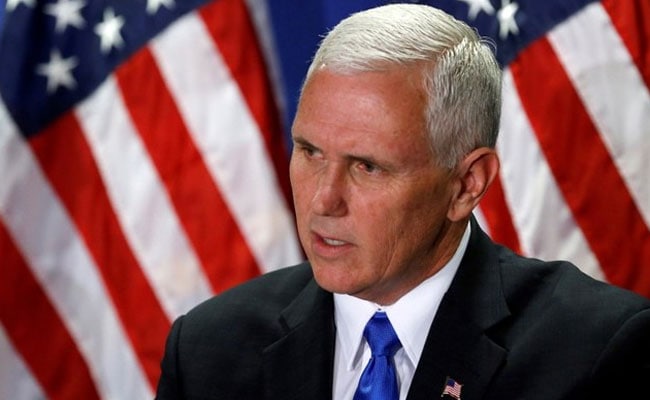 Mike Pence, on interviews, also said he and Donald Trump would respect the outcome of the election

WASHINGTON: Republican vice presidential candidate Mike Pence contradicted running mate Donald Trump on Sunday by saying evidence points to Russian involvement in email hacks tied to the US election and that Moscow should face "severe consequences" if it has compromised US email security.

Pence, appearing in television interviews, also said he and Trump would respect the outcome of the Nov. 8 election. But later the same day Trump stuck by his contention that the race is being "rigged" by the media and at voting locations.

"The election is absolutely being rigged by the dishonest and distorted media pushing Crooked Hillary - but also at many polling places - SAD," Trump wrote on Twitter on Sunday.

"I think there's no question that the evidence continues to point in that direction," Pence said. "There should be severe consequences to Russia or any sovereign nation that is compromising the privacy or the security of the United States of America."

US Vice President Joe Biden said in an interview that aired on Sunday that the United States would respond but he gave no details. "We're sending a message," he said on NBC's "Meet the Press."

Russian President Vladimir Putin this week said his country was not involved in trying to influence the US election.

Trump, who has been criticized for appearing too close to Russia after he publicly praised Putin's strong governing style, has questioned the reports of Moscow's involvement. "Maybe there is no hacking," he said during last week's second debate with Clinton.

Trump also broke with Pence on Russia during that debate. Pence had said the United States should use military force in Syria if Russia continued airstrikes to prop up President Bashar al-Assad, but Trump said he disagreed.

Trump this week has said the election is being rigged against him by the Clinton campaign and the media, raising questions from both Republicans and Democrats about whether he would accept the outcome should he lose to Clinton.

Trump, a New York developer in his first political race, often has said the electoral process is skewed against him, including in the primaries, when he disputed the method for winning delegates to the Republican National Convention.

His current complaint of media bias stems from reports of allegations by women that he groped them or made other unwanted sexual advances, after a 2005 video became public in which Trump was recorded bragging about such behavior. He apologized for the video but has denied each of the accusations.

"Election is being rigged by the media, in a coordinated effort with the Clinton campaign, by putting stories that never happened into news!" Trump tweeted on Sunday, a sentiment he also expressed in posts and during rallies in Maine and New Hampshire on Saturday.

Trump said after the first presidential debate in September that he would "absolutely" accept the election outcome. But he later revised himself, telling the New York Times, "We're going to see what happens."

He has also urged his supporters to keep an eye on voting locations to prevent a "stolen" election, which some critics interpreted as encouraging them to intimidate voters.

On Sunday, Pence said on CBS's "Face the Nation" Republicans would accept the election result.

Promoted
Listen to the latest songs, only on JioSaavn.com
The third and final debate between Trump and Clinton will be on Wednesday in Las Vegas.
© Thomson Reuters 2016