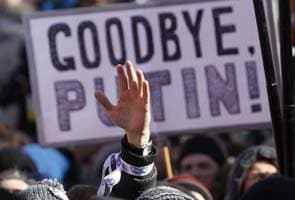 Moscow: Russian police detained more than 100 people on Sunday, including leaders of the largest protest movement against Vladimir Putin's 12-year rule, as hundreds rallied against him weeks after his re-election to the presidency.

At least 500 protesters gathered near Moscow's largest television tower at Ostankino to condemn what they said was the Kremlin's domination of the media and to denounce a recent documentary that portrayed them as floundering traitors.

"Putin's most important weapons are lies and propaganda and they are just as effective at protecting him as police batons," said former deputy prime minister Boris Nemtsov, minutes before riot police surrounded him and pushed him into a police van.

Protest leader Sergei Udaltsov, who is coordinator of opposition group Left Front, was also detained minutes after joining the demonstration. The rally had not been approved by city authorities.

A wave of protests began in December over allegations of fraud in an election that gave Putin's United Russia party a small parliamentary majority. Putin's nearly 64 percent victory in a separate presidential election in March has taken some of the wind out of the protests, but they show no sign of stopping.

Demonstrators on Sunday chanted "Russia without Putin", holding placards and white ribbons, which have become the symbol of the protest.

The mostly young and middle-aged Russians booed riot police as they dragged protesters from the crowd outside the Kremlin-friendly television station NTV. Police quoted by Interfax said more than 100 people had been detained.

Last week NTV, controlled by state-run gas giant Gazprom, suggested the White House was funding the protests to undermine Putin, and said demonstrators were given cash and biscuits to take part.

Russian television is rarely critical of the Kremlin and is seen by many Russians as Mr Putin's mouthpiece.

On Sunday protesters laid flowers, packets of biscuits and fake dollar bills outside the NTV studios at the Ostankino complex.

"We're here to mourn the death of a free press in Russia," said Tanya Shahova, after laying red carnations at the office doorstep.

"We were never given any money - or cookies," said her sister Ms Natasha, laughing. "It's all a provocation."

Several Reuters witnesses said around 500 had attended the rally. Police declined to give an independent figure.

NTV was once a vibrant liberal news outlet before a midnight raid on its offices after Putin took office in 2000. It is now known for running smear campaigns against those who have fallen foul of the Kremlin.

Putin has responded to the protests with limited political reforms. He has also mocked the demonstrators in speeches, calling them chattering monkeys and saying he mistook their white ribbon for condoms.

The next large protest is expected to take place on May 6, the day before Putin's inauguration, when opposition leaders plan to march toward the centre of Moscow.

Putin's new term will extend his rule up until 2018 at which point he would be eligible to try to secure a new six-year term.

Two protest rallies brought hundreds of demonstrators into central Moscow on Saturday. More than 20 were detained.

Promoted
Listen to the latest songs, only on JioSaavn.com
(Copyright Thomson Reuters 2012)