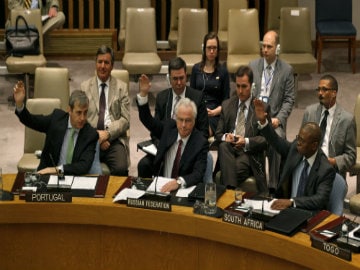 The U.N. Security Council faces a dramatic vote Thursday May 22, 2014 on referring the Syrian crisis to the International Criminal Court for investigation of possible war crimes, with dozens of countries signing on to embarrass Russia which vowed to kill

This is the fourth time the two countries have used their veto power as permanent council members to deflect action against the government of President Bashar Assad.

More than 60 countries signed on to support the French-drafted resolution in a dramatic move to demand a path to justice in the conflict, which has entered its fourth year.

The resolution would have referred Syria's crisis to the world's permanent war crimes tribunal without specifically targeting either the government or the opposition.

Before the vote, U.N. Deputy Secretary-General Jan Eliasson pleaded with council members to find unity and "put an end to this long nightmare." French Ambassador Gerard Araud warned, "A veto would cover up all crimes. It would be vetoing justice."

But Russian Ambassador Vitaly Churkin walked into the council meeting with a smile, telling reporters, "I'm going to be boringly predictable." He earlier had called the resolution a "publicity stunt" that would hurt efforts to find a political solution to a crisis that activists say has killed more than 160,000 and sent millions fleeing.

U.S. Ambassador Samantha Power had her speech ready for the promised veto. "Sadly, because of the decision of the Russian Federation to back the Syrian regime no matter what it does, the Syrian people will not see justice," she said. She added, "There should be accountability for those members of the council who prevented accountability."

The draft resolution condemned the "widespread violation" of human rights and international humanitarian law by Syrian authorities and pro-government militias as well as abuses and violations by "non-state armed groups" during the last three years. It would have referred the conflict to the world's permanent war crimes tribunal without targeting either side.

The Security Council has been deeply divided over Syria, with Syrian allies Russia and China at odds with the U.S., its Western allies and other members who support the opposition.

Frustration has soared as the international community struggles to find a solution to the war, deliver humanitarian aid to almost 3.5 million Syrians in need and end impunity for horrific crimes. Attempts at peace talks are at a standstill, leading the joint U.N.-Arab league envoy who tried to broker them to resign.

The dozens of co-sponsors to the latest failed Security Council resolution said they wanted to send "a strong political signal ... that impunity for the most serious crimes under international law is unacceptable."

Syria is not a party to the Rome Statute that established the International Criminal Court, so the only way it can be referred to The Hague, Netherlands-based tribunal is by the Security Council.

Syria's U.N. Ambassador Bashar Ja'afari sent a letter Tuesday asking countries not to support the resolution. A copy of the letter, obtained by The Associated Press, calls the proposal "biased" and an effort to "sabotage any chance of peaceful settlement of the Syrian crisis led by the Syrian people themselves."

Promoted
Listen to the latest songs, only on JioSaavn.com
The Security Council has managed twice to reach agreement on a Syria resolution, once to get rid of its chemical weapons and earlier this year to demand access for the delivery of humanitarian aid. The resolution on aid has largely failed.