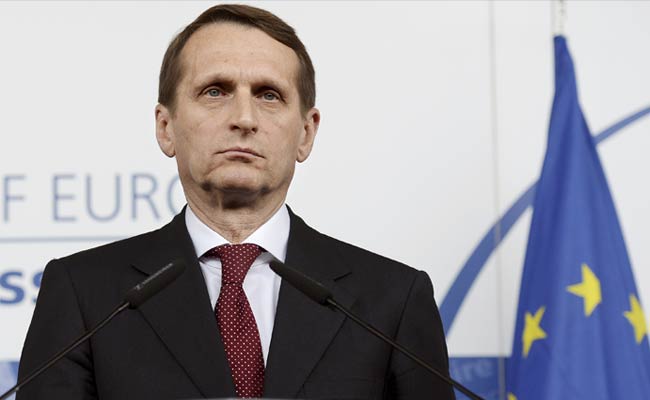 Moscow: Russia on Wednesday slammed Finland for refusing parliament speaker Sergei Naryshkin a visa, the first time he has been denied entry to the European Union after being put on a blacklist over Ukraine.

"Without question we consider this outrageous," Kremlin spokesman Dmitry Peskov was quoted as saying by Russian agencies, pointing out that Naryshkin was to head Russia's delegation to an international event of the Organization for Security and Cooperation in Europe.

The parliamentary assembly of the Organisation for Security and Cooperation in Europe is to meet July 5-9 in Helsinki to commemorate the 40th anniversary of the Helsinki accords, which improved relations between eastern and western Europe.

Around 150 Russians and Ukrainians have been placed under an EU travel ban over Russia's role in the Ukraine conflict.

"Finland has concluded after thorough consultations and analysis that the grounds for making the exemption for the entry into Finland of the persons that are on the EU Council's sanction list are not applicable," Paivi Kaukoranta, the chief legal counsel for the Finnish foreign ministry, told AFP.

"The other members of the Russian delegation are welcome to Finland," she said.

Naryshkin - who has been on the EU blacklist since March 2014 but has visited France on official trips since then - told Russian television that the rest of the country's delegation would skip the event.

"This is our expression of protest against lawlessness and against the violation of democratic principles," Naryshkin said.

The OSCE's parliamentary assembly is expected to discuss a proposed resolution at the meeting condemning "the Russian Federation's unilateral and unjustified assault on Ukraine's sovereignty and territorial integrity."

Russia has responded with a counter proposal entitled "the inadmissibility of the use of sanctions against parliamentarians of the OSCE participating states."

Russia has slapped a retaliatory entry ban on 89 European citizens - including past and serving parliamentarians who have openly criticised President Vladimir Putin and the war in Ukraine.

The existence of the list only became publically known after it was revealed to European diplomats in late May.
Comments
RussiaEuropean UnionOrganization for Security and Cooperation in EuropeEU CouncilHelsinkiFinlandparliament speaker sergei naryshkin