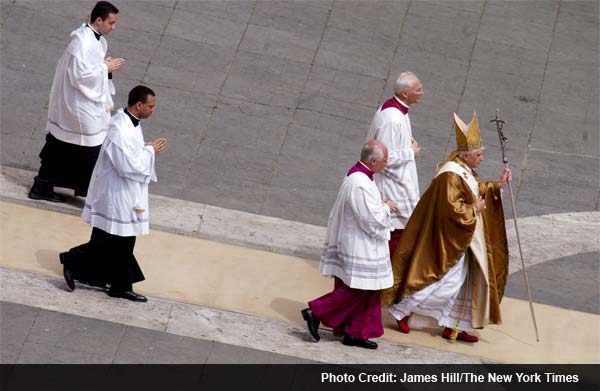 Vatican City: The decision, delivered in Latin and in unemotional tones by Pope Benedict XVI to a gathering of cardinals on Monday, came "like a bolt out of the blue," one of the participants said, and it soon ricocheted around the world.

During what was supposed to be a routine meeting to discuss the canonization of three potential saints, Benedict read a statement that said, in part, that after examining his conscience "before God, I have come to the certainty that my strengths, due to an advanced age, are no longer suited to an adequate exercise" of leading the world's 1 billion Roman Catholics. He was resigning on Feb. 28, he said, becoming the first pope to do so in six centuries.

"In today's world," Benedict said in his announcement, "subject to so many rapid changes and shaken by questions of deep relevance for the life of faith, in order to govern the bark of St. Peter and proclaim the gospel, both strength of mind and body are necessary, strength which in the last few months has deteriorated in me to the extent that I have had to recognize my incapacity to adequately fulfil the ministry entrusted to me."

Within minutes, (HASHTAG)Pontifexit was trending on Twitter. Later, during an evening thunderstorm, a lightning bolt struck the dome of St. Peter's, though the meaning, if any, was not immediately clear.

In recent months, Benedict, 85, had been showing signs of age. He often seemed tired and even appeared to doze off during Midnight Mass on Christmas Eve, after being taken to the altar of Saint Peter's on a wheeled platform. But few expected the pope to resign so suddenly, even though he had said in the past that he would consider the option.

"The pope took us by surprise," said the Vatican spokesman, the Rev. Federico Lombardi, expounding on one of the most dramatic moments in centuries of Vatican history. He appeared at a hastily called news conference on Monday, where he sat alone at a table, with an unopened bottle of mineral water and a dog-eared copy of a Canon Law guide before him.

Lombardi said the pope did not display strong emotions as he made his announcement, but spoke with "great dignity, great concentration and great understanding of the significance of the moment."

In a statement, President Barack Obama recalled meeting with Benedict in 2009.

"I have appreciated our work together over these last four years," the president said. "The church plays a critical role in the United States and the world, and I wish the best to those who will soon gather to choose His Holiness Pope Benedict XVI's successor."

More than a few observers were struck that such a traditionalist as Benedict would make such an unconventional exit.

"A departure that is paradoxically modern for a pope who was so conservative," said Christian Terras, the founder and executive editor of Golias, a religious review near Lyon, France, that has been critical of the Catholic Church.

Some said that Benedict's decision to step down was one of the most dramatic acts in the history of the papacy.

"This decision has been the only great reform of Benedict, and at the same time it is a revolutionary step for the Catholic Church," said Marco Politi, a Vatican expert and author of a book on Benedict's papacy. While in past centuries, popes had stepped down over political struggles, Politi said, "This is a clear decision and a free decision made by the pope that will set an example also for the future, setting a limit for the pontificate."

Benedict's 89-year-old brother, the Rev. Georg Ratzinger, said that the pope's weakening health had led him to step down.

"His age was taking its toll," Ratzinger told the German news agency dpa on Monday, adding that he had been aware of his brother's plan for several months.

That the resignation was long in the planning was confirmed by Giovanni Maria Vian, the editor of the Vatican newspaper, L'Osservatore Romano, who wrote on Monday that the pope's decision "was taken many months ago," after his trip to Mexico and Cuba in March 2012, "and kept with a reserve that no one could violate."

Lombardi said that the pope would retire first to his summer residence in Castel Gandolfo, in the hills outside Rome, and later to a monastery in Vatican City.

Benedict, the former Cardinal Joseph Ratzinger, was elected on April 19, 2005. At the time, Benedict was a popular choice within the college of 115 cardinals who chose him as a man who shared - and at times went beyond - the conservative theology of his predecessor and mentor, John Paul II, and seemed ready to take over the job after serving beside him for more than two decades.

The church's 265th pope, Benedict was the first German to hold the title in half a millennium, and his election was a milestone toward Germany's spiritual renewal 60 years after World War II and the Holocaust. At 78, he was also the oldest pope to be elected since 1730.

But Benedict was seen as a weak manager, and his papacy was troubled by debilitating scandals, most recently when his butler was convicted by a Vatican court in October of aggravated theft after he admitted stealing confidential documents, many of which wound up in a tell-all book that showed behind-the-scenes Vatican intrigue.

Benedict "centered his papacy on giving faith to Christians, focusing on the essence of what it means to be a Christian, and he managed to do it in spite of the fact that his communicative capacities weren't so brilliant," Sandro Magister, a Vatican expert, said. "Most common people, I don't mean intellectuals, saw him as a disinterested man who spent all his life for a high cause, which was to revive the faith."

At first blush, criticism was muted for a pope with a controversial term, marred by child-abuse scandals and growing discord over conservative stances on issues like divorce and women in the clergy.

Hans Kung, a theologian and former colleague of Benedict's who is now one of his most articulate critics, called his decision to step down "understandable for many reasons," according to the dpa news service, but added that so many conservative cardinals had been named during his tenure, it would be difficult to find someone "who could lead the church out of its multifaceted crisis."

The strongest criticism came from the victims of clerical sexual abuse, who faulted Benedict for failing to take stronger steps or, in some eyes, any steps at all.

"This pope had a great opportunity to finally address the decades of abuse in the church, but at the end of the day he did nothing but promise everything and in the end he ultimately delivered nothing," John Kelly, of the support group Survivors of Child Abuse, told Agence France-Presse.

Tom Cronin of Irish Survivors of Institutional Abuse International said that while age and infirmity were given as reasons for the pope's resignation, he believed the continuing clerical abuse scandal had played a part.

"I don't think he has been able to deal with it, and it was probably the straw that broke his back," Cronin said. "Every day we still get revelations about this priest or that bishop, and maybe he wasn't young enough to confront it and perhaps, too, he hasn't been getting the right advice. Whatever the reason, the church hierarchy just hasn't faced up to the atrocities and their denials and inaction continue to damage them."

In Rome, where souvenir shops often carry more postcards of John Paul than of Benedict, news of Benedict's resignation was met with surprise and some sadness.

"Anyone could tell that he was old and sick, and that such a complicated situation like the one he has to face is a lot, but I had never heard that a pope could quit," said Simonetta Piersanti, 52, a cleaning woman in a residence run by nuns.

She mentioned a common Roman saying, "When a pope dies, they just elect another," which captures the lack of excitement with which Italians greet historic events. "We'll have to do it even without the death part," she added.