Nikki Haley said that of the more than 1,000 randomly selected Rohingya Muslims surveyed in the State Department's own report, "fully one fifth" witnessed more than 100 victims being killed or injured. 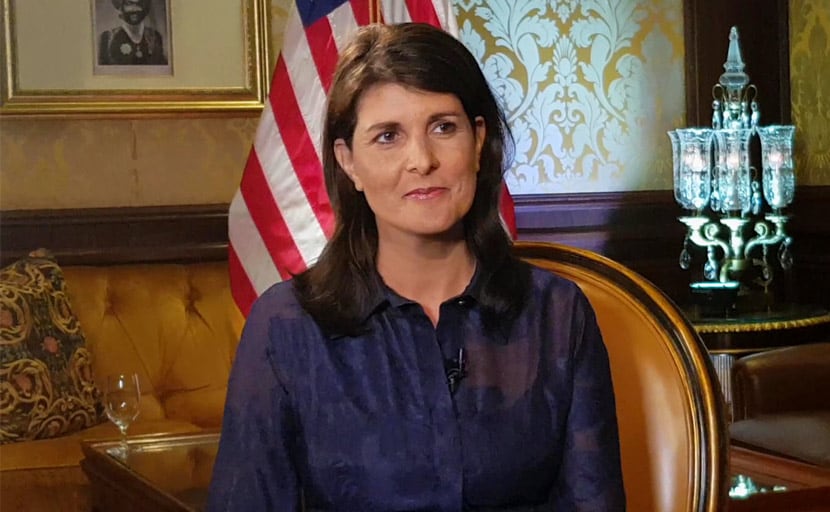 Findings of a US State Department investigation into Myanmar's Rohingya crisis are "consistent" with those of a report by UN investigators released this week that called for Myanmar's commander-in-chief and other generals be tried for genocide, the US ambassador to the United Nations said on Tuesday.

Addressing the UN Security Council, Nikki Haley said "the world can no longer avoid the difficult truth of what happened." She did not use the term "genocide" and the State Department has said it had not yet concluded whether it shared the determination of "genocidal intent" that Monday's UN report attached to the attacks on Rohingya Muslims.

However, Haley said that of the more than 1,000 randomly selected Rohingya Muslims surveyed in the State Department's own report, "fully one fifth" witnessed more than 100 victims being killed or injured. She said 82 percent had seen a killing, more than half had witnessed sexual violence and 45 percent had witnessed a rape.

"The report identifies one group as the perpetrator of the overwhelming majority of these crimes: the Burmese military and security forces," Haley said, referring to the US report.

She said the Security Council must hold those responsible for the violence to account and added, "The whole world is watching what we do next and if we will act."

Haley's comments provided the first details of the State Department report compiled from 1,024 interviews at refugee camps in Bangladesh and completed in late April.

It remained unclear when US Secretary of State Mike Pompeo planned to issue the full US report, which could have legal implications of committing Washington to stronger punitive measures against Myanmar, particularly if Washington concluded there was genocide.

The findings were originally due to be announced ahead of Monday's UN report but have been held up by internal deliberations.

"It is not one that is easily made," she told a regular news briefing on Tuesday.

Critics have accused Washington of an overly cautious response to the Rohingya crisis, but a US official, speaking on condition of anonymity, said on Monday that the UN findings could increase pressure for tougher US action.

The release of Monday's UN report marked the first explicit UN call for Myanmar officials to face genocide charges over their campaign against the Rohingya. It said the military carried out mass killings and gang rapes with "genocidal intent" and the commander-in-chief and five generals should be prosecuted.

Washington, which had previously imposed sanctions on only one regional general over the crisis, targeted four more military and police commanders and two army units this month, but Commander-in-Chief Senior General Min Aung Hlaing was again spared.

UN Secretary-General Antonio Guterres told the UN meeting that the UN report deserved serious consideration and that accountability was essential for genuine reconciliation between ethnic groups in Myanmar.

Also without using the word genocide, Guterres said the report by the independent UN experts found "'patterns of gross human rights violations and abuses' committed by the security forces, which it said 'undoubtedly amount to the gravest crimes under international law.'"

He said international cooperation would be "critical" to ensuring accountability.

Myanmar's ambassador to the United Nations, Hau Do Suan, repeated his government's contention that the Myanmar military had carried out a "logical response" to Muslim militant attacks. He said action would be taken against anyone responsible for human rights violations if there was sufficient evidence.

Guterres said the UN Security Council needed to continue to press for the release of journalists arrested for reporting on the Rohingya crisis, a reference to two Reuters reporters on trial in Myanmar.

Haley said the United States expected to see the two, Wa Lone and Kyaw Soe Oo, acquitted of all charges.

Also on Tuesday, US Senate Majority Leader Mitch McConnell said Myanmar's civilian leader Aung San Suu Kyi, who Washington has championed as a voice of democratic change, could not be blamed for atrocities as she did not have the powers necessary to stop military actions.

Haley made no mention of Suu Kyi, who the UN investigators said had failed to use her "moral authority" to protect civilians.

China, which has been vying with Washington for influence in Myanmar, said on Tuesday that "unilateral criticism or exerting pressure" was not helpful in resolving the Rohingya issue.

Some 700,000 Rohingya have fled the crackdown in Myanmar and most are living in refugee camps in neighbouring Bangladesh.

Guterres said an international humanitarian appeal for the refugees remained significantly underfunded at 33 percent and more must be done to alleviate the threats to life from the current and impending monsoons.

He said it was clear conditions did not yet exist for the safe return of the Rohingya and called on Security Council members to join him in urging Myanmar to cooperate to ensure access to UN agencies and partners.

"There can be no excuse for delaying the search for dignified solutions that will allow people to return to their areas of origin in safety and dignity, in line with international standards and human rights," Guterres said.

(Except for the headline, this story has not been edited by NDTV staff and is published from a syndicated feed.)
Comments
Nikki HaleyUnited NationsRohingya Genocide