Robbie Williams Among Guests Who Escape Fire At London Hotel

Robbie Williams was filmed making his way down a fire escape at the luxury hotel along with other guests as a vast plume of smoke billowed from the building. 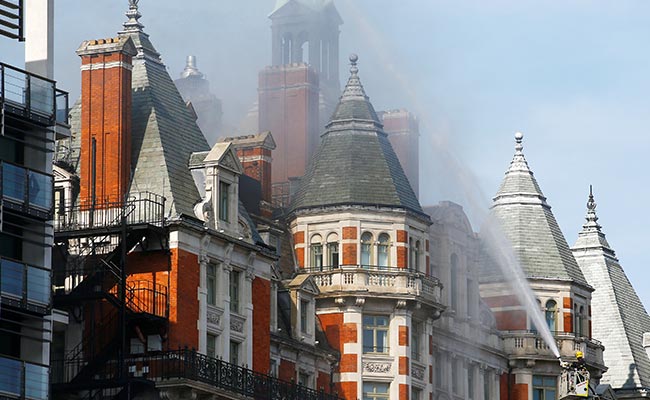 There were no immediate reports of casualties as 120 firefighters and 20 fire engines tackled the blaze.

London: Singer Robbie Williams was among hundreds of guests and hotel workers who were evacuated from the Mandarin Oriental in Hyde Park here when a huge fire broke out in the five-star hotel, but there were no casualties, police said.

Williams, 44, was filmed making his way down a fire escape at the luxury hotel along with other guests as a vast plume of smoke billowed from the building.

The star was seen heading calmly to street level and giving a thumbs up as flames leapt from the hotel's windows behind him.

There were no immediate reports of casualties as 120 firefighters and 20 fire engines tackled the blaze at the newly refurbished hotel.

Retired ambulance officer Gary Sanderson told the Evening Standard, "It was very acrid smoke and you can still smell it now 25 minutes later. It was the sort of smoke you get when there is a chip pan fire.

"There were a lot of people let out of the building and the emergency services reacted very, very quickly. It was a godsend that the fire was on the 12th floor, if it was lower down it would have been a lot worse".

A spokesman of the Mandarin Oriental said the fire brigade was till at the hotel.

"As the situation is still unfolding, we have no further details to share at this time, but will provide an update soon," he said.

The hotel underwent a multi-million pound refurbishment which was completed at the end of May this year.

In a &#163;185m refit, the hotel was kitted out with new bedrooms, public areas, restaurants and dining spaces and a new spa.

London Ambulance Service Deputy Director of Operations Peter McKenna said, "We were called at 4:04 pm to Knightsbridge, SW1X, to reports of a fire.