Pictures of the quartet putting aside their differences to look at floral tributes to Queen Elizabeth II outside her former Windsor Castle residence were splashed across the covers of many of the nation's Sunday papers. 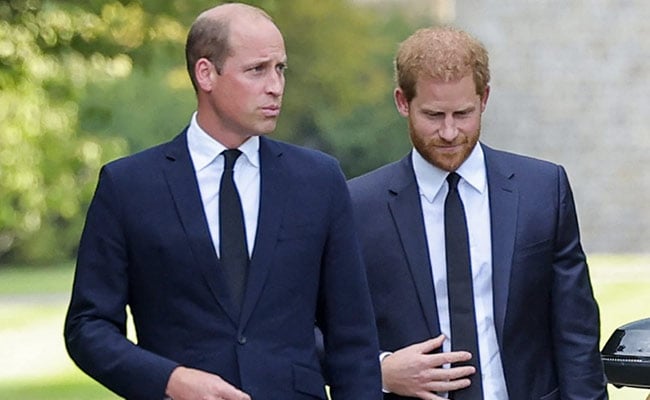 Despite the truce, relations still appeared to be frosty, according to UK newspapers. (File)

Britain's newspapers on Sunday hoped for royal reconciliation as their front pages were dedicated to the surprise reunion of estranged princes William and Harry, along with their wives Kate and Meghan.

Pictures of the quartet putting aside their differences to look at floral tributes to Queen Elizabeth II outside her former Windsor Castle residence were splashed across the covers of many of the nation's Sunday papers.

"Reunited for granny," read the Mirror's headline, while the Telegraph ran with "Reunited in sorrow" and the Sun with "All 4 One".

Despite the truce, relations still appeared to be frosty, with the Times headline reading "Warring Windsors' awkward truce to honour the Queen".

"In death, the Queen appeared to do the impossible by bringing brothers William and Harry back together," said Sun columnist and royal expert Ingrid Seward.

"When they emerged from the same vehicle for a walkabout in Windsor, accompanied by their wives, a nation held its breath ... It is quite possible that emotions will be running so high the brothers could become friends again," she added.

The Mail's Sarah Vine said that the reunion "will have gladdened the hearts of millions."

"Will it last? We must pray it does," she added, calling on Harry to drop plans to publish his autobiography.

"It is time now for forgiveness, to put all those things to one side and find a way forward together," she wrote.

While there was optimism among some papers, the Sunday Times said that "although the brothers put on a show of unity at Windsor, it is understood that the camps required extended negotiations behind the scenes beforehand, delaying their arrival for the walkabout by 45 minutes."

The Sun also cautioned that "it is understood past wounds haven't fully healed, and the walkabout was more a temporary truce."

The Sunday Telegraph described the move as "a knockout PR blow intended to stop 10 days of national mourning being overshadowed by tales of the on-going rift between the royal brothers."

It praised William for offering an "olive branch", saying the prince had "created his very own 'cometh the hour, cometh the man' moment."

However, it warned that "while the joint appearance will undoubtedly begin a healing process for the once-inseparable siblings, there is no denying that the road to peace is not without its potential potholes."