Reports of interest in Osama chopper are absurd, says China 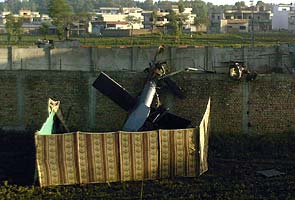 Beijing: China today dismissed as "absurd" reports that it had sought access from its all-weather friend Pakistan to the wreckage of the US' secret stealth-modified helicopter, which had crashed during the unilateral American raid that killed Osama bin Laden in his Abbottabad hideout.

Asked about reports that China had either sought access or already seen the wreckage to study the design of the chopper which was for the first time used by the US military, Chinese Foreign Ministry spokesperson, Jiang Yu, told reporters that it was "absurd," declining to say anything further.

US television network ABC News had reported that Pakistani officials were interested in studying the remains of the helicopter and suggested that the Chinese were interested as well.

American officials apprehended that China, which specialised in reverse-engineering technology, may try to recreate the technology of the destroyed helicopter.

In 1998, Pakistan's military and intelligence services facilitated the transfer of an unexploded American Tomahawk missile recovered by Taliban to China.

The Chinese were then able to reverse-engineer the missile and dissect its components, allowing them to learn its vulnerabilities and defeat its capabilities.

Also much of the wreckage of a F-117 Nighthawk bomber shot by Serbian rebels is believed to have made its way to China.

During the May 2 raid in Abbottabad, a specially-configured stealth US Special Forces helicopter crashed and even though US soldiers attempted to destroy it, the tail was left intact and was recovered by the Pakistanis.

The US has already asked the Pakistanis for the helicopter wreckage and the ABC quoted a Pakistani official as saying that Chinese were also "very interested" in seeing the remains.

Another official said, "We might let them (the Chinese) take a look."

The chopper, which aviation experts believe to be a highly-classified modified version of a Blackhawk helicopter, clipped a wall during the operation to kill the Al Qaeda leader.

The Navy SEALs who were travelling on it attempted to destroy it after abandoning it on the ground, but a significant portion of the tail section survived the explosion, following which it was towed by Pakistani military officials to an unknown destination.
Comments
US stealth heliopterUS stealth chopperOsama raidUS chopperUS chopper crashChina US chopperNavy SEAL chopper