Ten sailors have been missing since the USS John S. McCain and a Liberian-flagged oil tanker more than three times its size collided at the entrance to the Strait of Malacca before dawn on Monday. 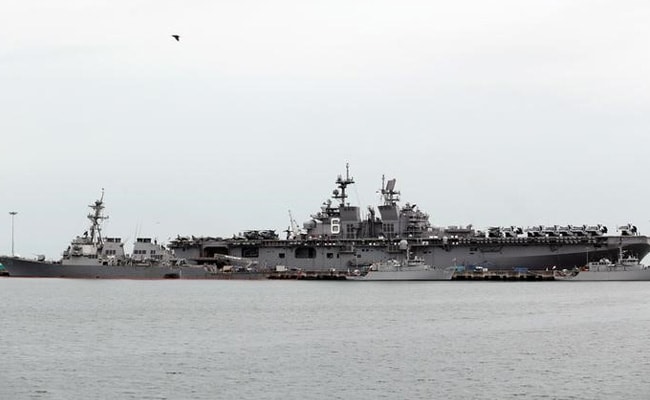 SEOUL, South Korea: The remains of some of the 10 sailors missing since a U.S. Navy guided-missile destroyer collided with an oil tanker near Singapore have been found, but the search continues, a Navy commander said Tuesday.

Ten sailors have been missing since the USS John S. McCain and a Liberian-flagged oil tanker more than three times its size collided at the entrance to the Strait of Malacca before dawn on Monday.

Singaporean and Malaysian navy ships and helicopters had joined American aircraft searching for the sailors at sea. But earlier Tuesday, Navy and Marine Corps divers were sent into the compartments in the damaged part of the destroyer that had been sealed to stop the ship from being flooded. The ship is now moored at Changi naval base in Singapore.

The divers had found the remains of some of the sailors inside the compartments, Adm. Scott Swift, the commander of the Navy's Pacific Fleet, said at a news conference in Singapore.

The Malaysian Navy also reported it had found a body, but it was not yet clear if it was one of the missing sailors. The body is in the process of being transferred to the U.S. Navy for identification, Swift said.

It was "premature" to say how many bodies had been found, Swift said.

There were no further details, and the search is still ongoing, Swift said. He added that ship suffered "significant damage" and investigators were seeking to piece together "what happened and how it happened."

Tuesday's statement will come as a heavy blow to the Navy but particularly to the 7th Fleet based in Yokosuka, Japan.

Yokosuka is the home port for both the McCain and for the USS Fitzgerald, which was involved in a surprisingly similar collision just over two months ago, leading to seven sailors being killed.

The Fitzgerald collided with a container ship south of Japan, leading to significant damage to its hull and a frantic effort to seal off the damage and stop the rest of the ship from flooding. Seven sailors were trapped in their berthing compartment in the process, and all drowned.

The Navy's top admiral on Monday ordered a fleetwide review of seamanship and training in the Pacific after the latest collision.

The series of accidents in the Pacific "demands more-forceful action," Navy Adm. John Richardson, the chief of naval operations, told reporters Monday, adding that there is "great cause for concern that there is something we are not getting at."

He ordered Navy fleets across the world to take a day or two within the next week to review their procedures and training to make sure they are operating safely.

The McCain is an Arleigh Burke-class destroyer - named after the father and grandfather of Sen. John McCain, R-Ariz., and nicknamed "Big Bad John" - that had been on its way to a routine port visit in Singapore after patrolling in the South China Sea.

The collision occurred just east of the Strait of Malacca, a 550-mile-long stretch of water that runs between the Malay Peninsula and the Indonesian island of Sumatra, connecting the Pacific and Indian oceans, and is one of the world's busiest shipping lanes.

The collision caused significant damage to the hull, flooded nearby compartments, including crew berthing, machinery and communications rooms, the 7th Fleet said in a statement.

Promoted
Listen to the latest songs, only on JioSaavn.com
© 2017 The Washington Post