Ties With US Better For Indo-Pacific Nations: Mike Pompeo's Jibe At China

Responding to a question on countries who have been part of China's 'One Belt One Road' projects, Mr Pompeo said some of the countries who have engaged in that find themselves in a place that they are not happy about. "I think the others are beginning to see that as well," he said. The US is looking at partnerships and not dominance in the Indo-Pacific region, Secretary of State Mike Pompeo said today as he unveiled a series of developmental initiatives, which many experts believe is to counter China's 'One Belt One Road' policy in the region.

Mr Pompeo, however, denied that the Trump administration's developmental initiatives were aimed at countering China.

"We're convinced that American engagement in the Indo-Pacific benefits all the nations in that region. We want it to be free, we want it to be open. We're not looking for dominance. We're looking for partnerships. Others choose to behave differently. We want these to be commercially available projects led by the American private sector in a way that benefits the entire region and the world," Mr Pompeo told CNBC in an interview.

Responding to a question on countries who have been part of China's 'One Belt One Road' projects, Mr Pompeo said some of the countries who have engaged in that find themselves in a place that they are not happy about. "I think the others are beginning to see that as well," he said. 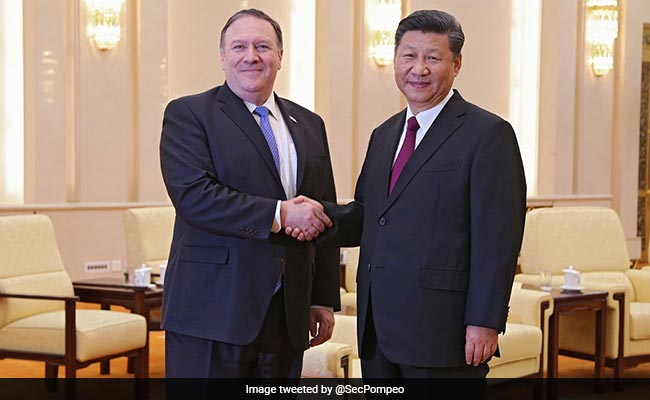 US Secretary of State Mike Pompeo suggested, that unlike China, nations in the Indo-Pacific will have free and transparent ties with US

"The way you convince them is that you demonstrate that over the course of history, over the even near term and medium term, that developing relationships with the United States, that having transparency, actually turns out to be better for the leadership and for the people in each of these countries," Mr Pompeo said.

"I'm convinced that history supports that theory, and I'm also convinced that the vast majority of the countries in the Indo-Pacific will agree with that," said the top American diplomat.

The Indo-Pacific region, he said, has been an important region for a while, but the Trump administration is taking this incredibly seriously.

"We'll have contracts that are open and transparent. We'll form real partnerships with these countries, and we will benefit America for sure, but we'll benefit each of the nations in the Indo-Pacific by engaging in this way," he said in response to a question.

Earlier in the day, Mr Pompeo launched the economic and commercial pillars of the Trump administration's Indo-Pacific strategy. Addressing top US business leaders and foreign dignitaries at the US Chamber of Commerce, he emphasised the critical role of the US private sector in ensuring a sustainable, financially responsible economic future for the Indo-Pacific.

He launched new initiatives to accelerate US private investment and support job-creating US export opportunities in the areas of digital economy, infrastructure, and energy. He also reaffirmed the administration's support for the Better Utilization of Investments Leading to Development (BUILD) Act, which would more than double the US government's development-finance capacity, to $60 billion, to support US private investment in strategic opportunities abroad.

At the Indo-Pacific Business Forum, Mr Pompeo announced $113.5 million in new US economic initiatives to support foundational areas of the future: digital economy, energy, and infrastructure. "This represents a strategic investment in deeper engagement with the Indo-Pacific while growing our own economy and creating jobs at home," the State Department said.

Through the Digital Connectivity and Cybersecurity Partnership, the US will improve partner countries' digital connectivity and expand opportunities for US technology exports. In addition to establishing public-private partnerships to build digital infrastructure, this initiative will deploy technical assistance to improve partner countries' regulatory policies and cybersecurity.

Further Asia EDGE or Enhancing Development and Growth through Energy will strengthen energy security and promote energy access across the Indo-Pacific.

Mr Pompeo announced at the Indo-Pacific Business Forum that the Millennium Challenge Corporation will implement a $350 million compact with Mongolia to enhance sustainable water supply to the Mongolian capital of Ulaanbaatar.

He also announced strengthened support for important regional institutions in the Indo-Pacific, including the Association of Southeast Asian Nations (ASEAN) and US-ASEAN Connect, Asia-Pacific Economic Cooperation (APEC), and the Lower Mekong Initiative, along with a first-ever contribution to the Indian Ocean Rim Association.