"What is that?" Celeste Perez narrated through a window as the bright streak zoomed over downtown skyscrapers. "Oh my God. It's a meteor. It's a fireball. What the hell?" 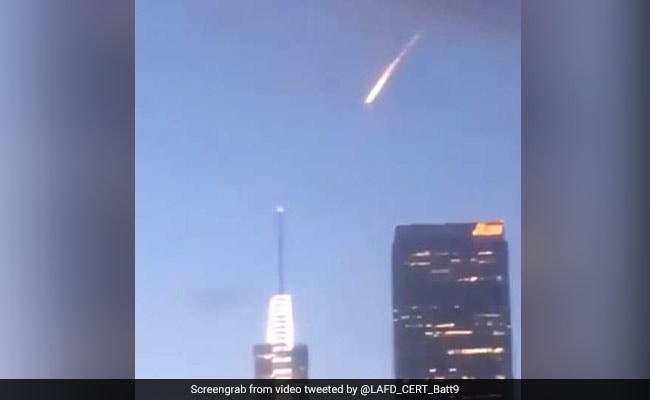 From a distance, it was a flash screaming across the Los Angeles skyline on Wednesday evening, prompting wonder and a tinge of fear that the object could be otherworldly.

"What is that?" Celeste Perez narrated through a window as the bright streak zoomed over downtown skyscrapers. "Oh my God. It's a meteor. It's a fireball. What the hell?"

But from a closer perspective, it was soon clear what that object was: A promotion tool from one of the most self-aware companies in the galaxy.

"A meteor did not crash into Downtown Los Angeles, and no, it's not an alien invasion," Los Angeles police said on Twitter, as speculation consumed the city and videos percolated through social media.

"Just a film shoot. This is Tinseltown after all."

Red Bull filmed flare-wielding wingsuit jumpers against the backdrop of the supermoon, to the delight of people on the ground waiting with smartphones tilted up for the moment the jumpers touched down.

"Wearing wingsuits that shape the human body into an airfoil, they leapt from a helicopter 4,000 feet above L.A. and swooped into downtown at more than 120 mph," Red Bull said in a statement. "To add a touch of Hollywood glitz, the suits were fitted with LED lights and sparking pyrotechnics that lit up the night sky as the sun set and the supermoon rose."

The company said the three were experienced "Red Bull Air Force" jumpers, though the company's claim of having an aerial attack force appears limited to stuntmen.

It became clear from social media that not everyone got the memo.

"Did anyone else see a meteor fly over downtown L.A. and the six helicopters surrounding it currently?!" one Twitter user wrote. "Y'all peepin that?!"

And another: "Did anyone else see that meteor over Downtown Los Angeles?? #crazy"