By contrast, shipments in April were down more than 82% from a year ago and down nearly 30% in May. 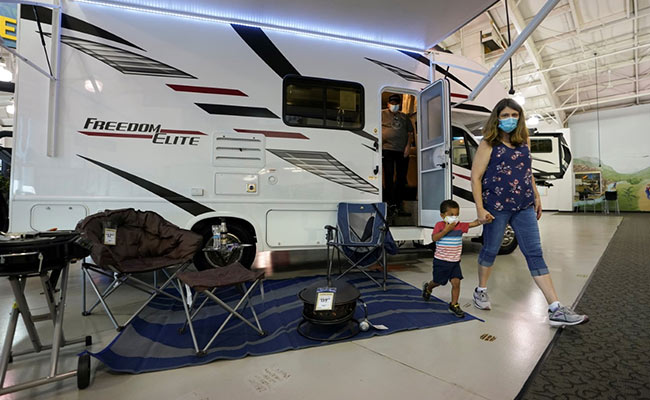 Surveys indicated most buyers are first-time purchasers of recreational vehicles

Call it the turtle solution to wanderlust in the age of COVID-19.

Eager to travel - but wary of hotels, airplanes and restaurants - more Americans are taking their homes with them everywhere they go, reviving a recreational vehicle business that had been devastated by shutdowns earlier this year.

Wholesale shipments of RVs posted their highest monthly total in June since October 2018, according to the RV Industry Association, the industry's main trade group, marking a sharp reversal after months of deeply depressed business. In data provided to Reuters, the group tallied 40,462 units shipped last month, a 10.8% increase over a year ago.

By contrast, shipments in April were down more than 82% from a year ago and down nearly 30% in May.

"We didn't anticipate this turn being as strong as it has been," said Craig Kirby, the group's president. "People don't want to fly, they don't want to stay in a hotel. In an RV, you can cook your own meals and sleep in your own bed."

Kirby said his group expects more people to start using RVs as mobile offices as well. Some manufacturers are developing RVs "with dedicated workspaces that allow for the desks and other systems to be stowed away once work is over," he said.

One indication that the upturn is a response to the pandemic is the large number of first-time buyers, Kirby said. Surveys of RV dealers indicate most buyers, between 50% to 80%, depending on location, are first-time purchasers. A year ago, that share ranged between 25% and 35%. RVs are also attracting more younger buyers.

While shipments are strong, the mix of RVs is heavier on towable and smaller motorhome models, rather than often much-pricier big motorhomes. Shipments of towable RVs was up nearly 13% last month.

Major players in the industry also have flagged the turnaround.

"We have seen an incredible rebound in retail demand and dealer demand since early May across all our businesses," Winnebago Industries Inc <WGO.N> Chief Executive Michael Happe said on a conference call last month.

Investors have cottoned onto the trend, too. Winnebago shares are up nearly 11% this year versus a 2.4% decline for the S&P 500. Shares of rival Thor Industries are doing even better, gaining 38% this year.